EastEnders Spoilers: Tiffany At Wits End – Can Not Handle Life With Keegan 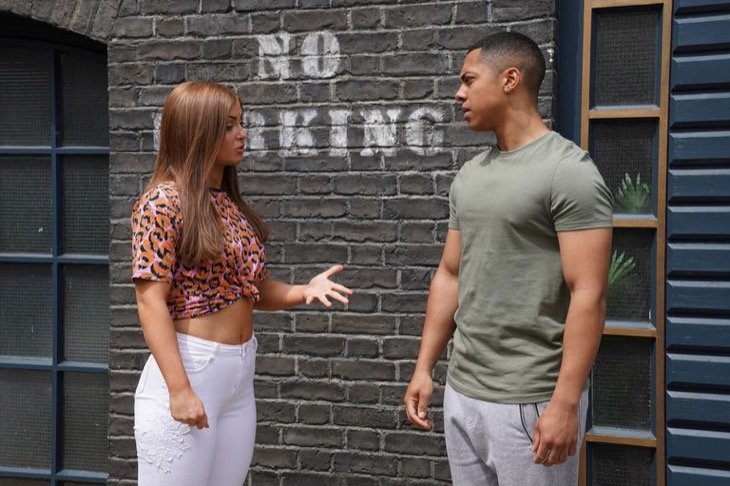 EastEnders spoilers hint that Tiffany Butcher-Baker (Maisie Smith) will soon be at her wit’s end when it comes to her relationship with Keegan Butcher-Baker (Zack Morris). Tiffany has tried to stay by Keegan’s side but has found it to be extremely difficult as time goes by. The more that he is being targeted, the more he takes his anger out on others. This will push her to the end and may lead to the end of their relationship.

Keegan has recently been targeted by law enforcement on numerous occasions, which has affected his business, making it harder for him to earn a living. This has made him become angry about the situation he is in, and he has taken his frustration out on the people around him, mostly Mitch Baker (Roger Griffiths) and Tiffany. Tiffany tried to reason with him by showing that he is not the only one going through some trouble lately as Whitney has been accused of killing Leo. Not only has she been accused, but she was thrown in prison after months of not being believed when it comes to her being stalked by Leo. However, this only escalated things between the two. They would soon make peace with one another, but there would soon be trouble ahead at a party.

At Vinny’s party, Keegan was falsely accused of throwing a brick at a police car. This caused them to get arrested, which will cause more problems in the future.

The stress will soon weigh on Keegan as he tries to balance the idea of going to prison and the fact that he had been evicted, and he will begin taking his anger out of others. This is going to push Tiffany to the edge as she tries to find a way to help Keegan but feels like every time he tries to help, that she just makes things worse. This may lead to her leaving Keegan.

Viewers can look forward to the continued drama between Keegan and Tiffany. What do you think? Will Keegan and Tiffany last, or will they fall apart? Watch EastEnders from Monday and Friday at 8 pm and Tuesday and Thursday at 7.30 pm on BBC One to find out what happens next.