Days of Our Lives Spoilers: Kayla Makes A Difficult Decision – But Will It Be The Right One? 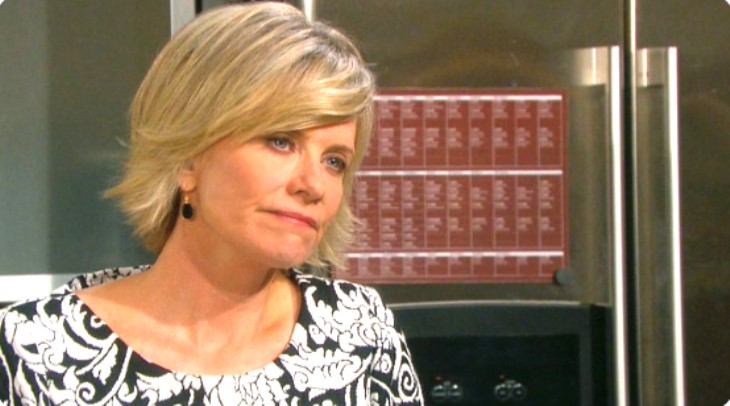 Days of Our Lives spoilers indicate that Kayla Brady (Mary Beth Evans) is forced to make a very difficult decision – she doesn’t know if she should stay with Steve (Stephen Johnson) or be with Justin (Wally Kurth). Here’s what you need to know.

Days of Our Lives Spoilers – Kayla Brady Makes A Difficult Decision – But Will It Be The Right One?

Speaking to Soap Opera Digest in a new interview, actress Mary Beth Evans, who plays Kayla Brady on the hit NBC soap, says that she has every reason to be upset at Steve, seeing how that he’s back to being his normal self. She tells the publication in a new interview, “He is making a unilateral decision about her choice, her life, and their lives. Steve always thinks he knows better, and Kayla is so beyond that.”

Days of Our Lives Spoilers: Stefano’s Fate As A Microchip Was Cut From Episode – We Fill In The Blanks

Days of Our Lives spoilers indicate that if that weren’t enough, Kayla is also feeling very hurt, seeing how this is the father of her kids, her longtime love, and her ultimate soul mate. At least, that’s how she feels.

Mary Beth Evans adds, “Even though she loves Justin and she is committed to him, she’s feeling conflicted. Steve has just made this decision for them without consulting her. It’s so maddening. She’s upset. She’s heartbroken.”

Days of Our Lives spoilers say that after their talk, Kayla leaves and runs to Justin, who wants to know why she has been crying. She says that Steve rejected her, which prompts and interesting response from Justin. He doesn’t want to play second fiddle and he doesn’t want to win her by default. So, does this mean that Kayla is forced to go back to the beginning again? Maybe, but she does understand that Steve is probably right that it’s a better choice for her to be with Justin.

Days of Our Lives Spoilers: Stefan Used As Dramatic Deception – Gabi’s Weakness Used To Take Her Down? https://t.co/btKpezPyXI pic.twitter.com/KJUcIvsgML

Needless to say, Days of Our Lives fans will have to tune in to find out what will happen next. But if there’s one thing that we already know, it’s that there’s always trouble just around the curve, right?