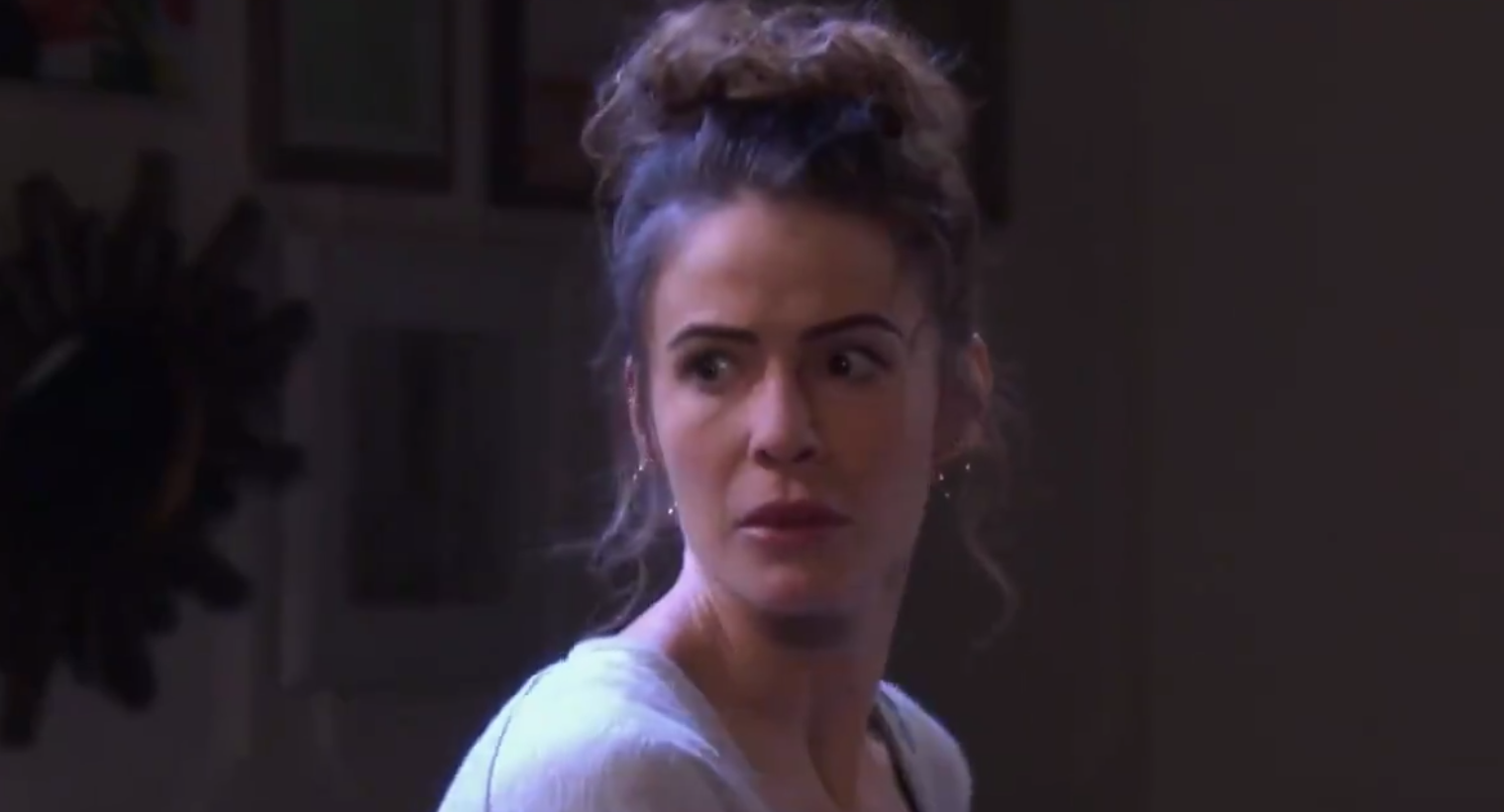 Days of Our Lives spoilers tease that Gabi Hernandez DiMera (Camila Banus) sees a ghost – or is he? – David Ridgeway’s (Caleb and Kyler Ends) paternal aunt, Zoey Burge (Kelly Thiebaud) fights for custody – Sarah Horton (Linsey Godfrey) has a visitor in Paris, where she has fled with baby Rachel Black (Josephine and Rosalind May) who she thought was Mackenzie Horton (Josephine and Rosalind May) – and Kristen DiMera, (Stacy Haiduk) who thought her baby Rachel was dead for so many months takes vengeance on Victor Kiriakis (John Aniston) and stabs him this week on Days of Our Lives!

Days of Our Lives Spoilers: Gabi Hernandez Sees A Ghost – Or Does She?

While Gabi is alone in a dark room she turns suddenly to see a ghost looking out a window – or does she? She cries out, “Stefan?” as someone who appears to look a whole lot like – maybe even a doppelgänger of – her late husband, Stefan O. DiMera (Brandon Barash) is very visibly in the room! Will it be Stefan? Will Dr. Wilhelm Rolf (William Utay) have found a way to bring him back to life, or does he have a twin brother that he knew nothing about and Vivian Alamain (Louise Sorel, most recently Robin Strasser) never mentioned, and he has found out that he is a son of Stefano DiMera (Stephen Nichols) and come calling for his inheritance? She knew Stefan grew up in an orphanage as Sam Maitlin, but neither he nor his mother ever mentioned a twin, so who will he turn out to be?

Rafe Hernandez (Galen Gering) is shocked when Christian Maddox/Evan Frears’ (Brock Kelly) attorney also turns out to be his sister, and therefore David’s aunt! She tells Rafe that David already has a father, and she is suing for custody! It’s unclear from her verbiage if she wants to adopt her nephew herself or if she is speaking in behalf of David’s birth father, Evan. She is fierce and up in Rafe’s face and he can tell that she means business! Rafe has been the only father David has ever known although Evan was his “manny” up until the family court notified Rafe that he had a criminal record, and an alias! He also killed David’s mother, Jordan Ridgeway (Chrishell Stause) but the charges were dropped. With Orpheus (George Del Hoyo) as his grandfather on one side and Clyde Weston (James Read) on the other, Rafe must be rooting for the nurture side of the nature versus nurture argument!

Days of Our Lives Spoilers: Kayla Makes A Difficult Decision – But Will It Be The Right One? #DAYS #DOOL #DaysOfOurLives #DaysSpoilers #DOOLSpoilers #Salem #NBCDaytime https://t.co/mdzpS3pNt8

In an apartment in Paris, France, Sarah is telling Rachel, who she obviously has decided to keep since she ran off with her, that she’s never going to let anyone take her away! But then there seems to be someone at her door, which is creaking as she goes to look for who it is…has Xander Kiriakis (Paul Telfer) tracked her down? End of week spoilers tease that Xander will plead with Sarah, but will he be pleading his own case, for him to be husband to her and daddy to the baby, or Brady Black (Eric Martsolf) and Kristen DiMera’s to bring their baby back?

Meanwhile, back in Salem, Brady has put two and two together and realized that Xander did not act alone in this baby switch – and Kristen has figured it out as well, and she is seething as she approaches an unarmed Victor Kiriakis sitting in his chair at the Kiriakis mansion! She has a knife, and she tells him angrily that he stole her child, and then she stabs him! Will Victor live or die, and will Brady figure out she was the attacker?