The Bold and the Beautiful Spoilers: Katie Has Checked Out From Her Relationship With Bill – There’s No Turning Back 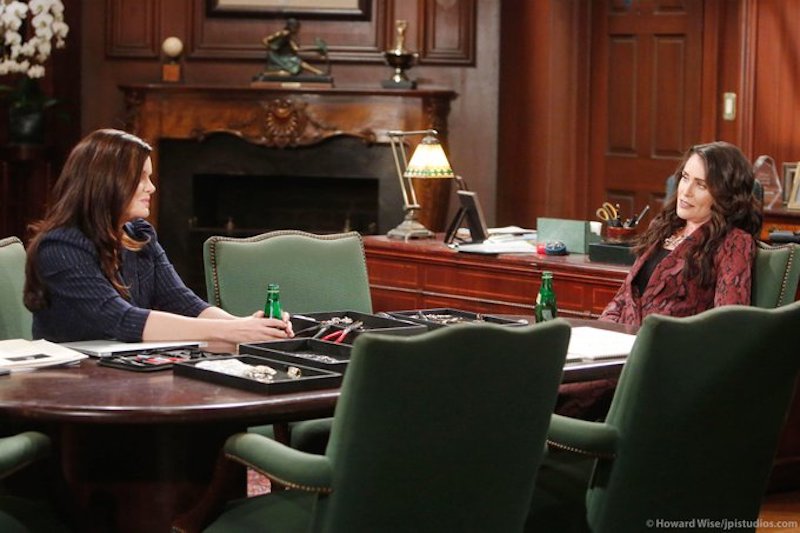 Bill Spencer (Don Diamont) created his own problem, again, on ‘The Bold and the Beautiful’. This time he might not be able to keep the family he adores intact. After proving himself to Katie Logan (Heather Tom), Bill has shattered her trust.

In what is another of his great mistakes, Bill went to see Brooke Logan (Katherine Kelly Lang). Their cabin kiss moved from a foolish, mutual impulse, that they decided to keep private, to a purposely intended public debacle.

Seeing Bill kissing Brooke in front of the gathered crowd, at the intended ‘Bridge’ reunion party, devastated Katie. But after demanding answers through tears, Katie pulled herself together and had a measured conversation with the supposedly former ‘Brill’.

Bold And The Beautiful Spoilers – Katie Logan Is Resigned To Reality

Katie knows that Bill loves her. That’s not the issue. She also loves him and was overjoyed to have restored their ‘Batie’ family.

Will Spencer (Finnegan George) has always thought his dad was the coolest man on the planet. Bill agreed, but eventually learned how to be humble and contrite. Doing so convinced Katie to try to reconcile and live as a family at Bill’s house.

As B&B fans know, Bill’s choice to drop the ‘Dollar Bill’ persona was a key part of his sincere push to prove his commitment to Katie. He succeeded, until the cabin kiss happened. Now, Tom’s character appears resigned to the reality that Bill is who he is and always will be that.

Bold And The Beautiful Spoilers – Sister’s Involvement Takes The Cake

Bold and The Beautiful Spoilers: Can Sally Redeem Herself Or Is She Headed To Jail Once The Big Reveal Comes? #bb #BoldandBeautiful https://t.co/ZgvVthLKy3

No lavish wedding was planned between Bill and Katie, but they were back together and that was enough for both of them and Will. Nothing was in their path and the future was shining brighter than Sky, Bill’s vanity corporate building project that was discarded when he shifted priorities.

To think that Brooke, of all people, would violate Katie’s trust and throw ‘Batie’s’ future into total jeopardy, is actually incredible. But everyone saw what Lang’s iconic character did and then had to endure the painful explanations, while also witnessing Ridge Forrester (Thorsten Kaye) punch Bill in the face.

Bill’s apologies and promises to Katie aren’t meaningless, they’re just not effective. Yes, Katie will always have a place in her heart for him. It’s likely that the greatest love she will ever have will be with Bill. But she can not deal with his repeated, destructive actions.

There’s nothing he can promise that will somehow prevent yet another mistake happening with Brooke, or someone else in the future. And so Bill may need to resign himself to the fact that ‘Batie’ could be over.