Days of Our Lives Spoilers: Kayla ‘Super Upset’ When Steve Tells Her To Stay With Justin 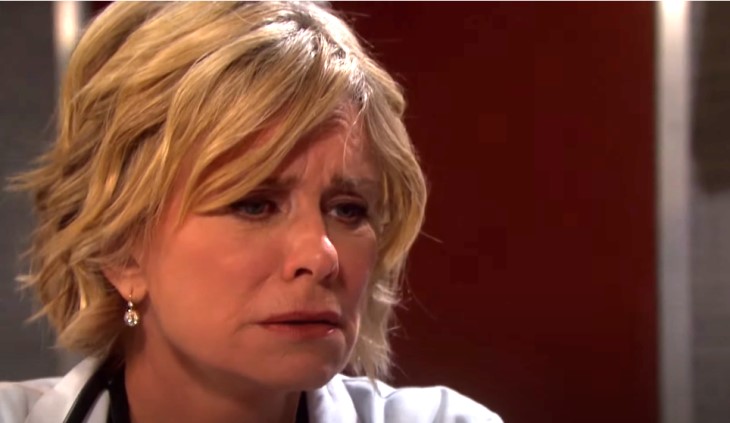 Days of Our Lives spoilers reveal that Steve Johnson (Stephen Nichols) makes a shocking decision. Instead of fighting for Dr. Kayla Brady (Mary Beth Evans), “Patch” decides his “sweetness” should stay with Justin Kiriakis (Wally Kurth). The actress teases that the doctor is “super-pissed” with Steve. During an interview, Evans explained why her character is so furious.

DOOL spoilers reveal that there is another love triangle in Salem. After getting back signed divorce papers without an argument or explanation, Kayla moved on. She got close to Justin after Adrienne Kiriakis’ (Judi Evans) death. The friends formed a deep bond and eventually, it evolved into a romantic relationship.

Now that Steve has the brain chip out of his head, he no longer thinks he is Stefano DiMera. He is finding out the extent of his bad behavior. No matter what, he still loves Kayla and had planned on fighting for her.

With Steve, they had a lot of passion, but it was a bit of a rollercoaster. He would take off on missions and she wouldn’t hear from him for a long time. There always seemed to be something that separated them, then they would get back together. The cycle would repeat several times over the course of three decades. However, they always found their way back into each other’s arms.

With Justin, the romance is different. There doesn’t seem to be a lot of wild, crazy passion. But it is a more mature love and one that is built on stability. Kayla knows exactly what to expect from Justin. It is clear that they care and love one another. However, is it “true love?” That is the big question that is weighing on Kayla’s heart.

Days of Our Lives spoilers reveal that Steve tells Kayla that she belongs with Justin. In his mind, Kayla has been deeply hurt by Steve’s actions. He also wants her to be happy and knows that Justin treats her well. There is a saying that if you truly love someone, let them go. That is exactly what Steve is doing, but Kayla doesn’t take the news very well.

In the latest issue of Soap Opera Digest, Evans talked about Steve’s decision and Kayla’s reaction. The doctor is “super-pissed,” even though Steve’s intentions are good. The reason she gets so upset is that Steve made the decision for her.

“Kayla is super-pissed because it’s the usual Steve. He is making a unilateral decision about her choice, her life, and their lives. Steve always thinks he knows better, and Kayla is so beyond that.”

Kayla ends up running into Justin and he wants to know why she’s crying. The conflicted doctor tells him the truth — that she was rejected by Steve. Stunned with a painful truth bomb, will he keep fighting for the woman he loves or set her free to follow her heart?