The Bold and the Beautiful Spoilers: Wyatt Rages – Discovers Sally’s Lies And Deception 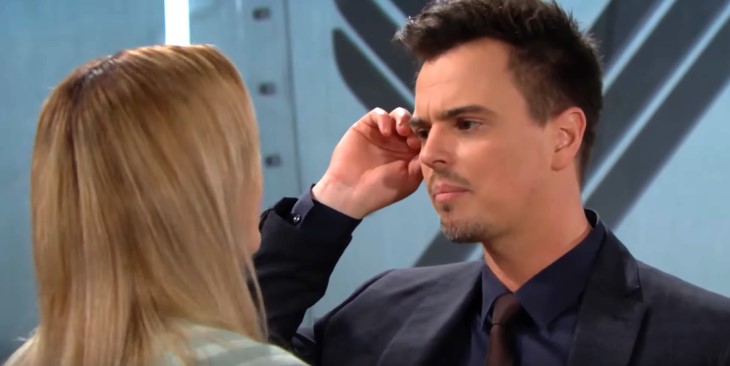 The Bold and the Beautiful spoilers suggest that Wyatt Spencer (Darin Brooks) could be so furious with Sally Spectra (Courtney Hope) when he learns that she has been deceiving him about her terminal illness that he cuts ties with her forever. With that said, B&B fans know that Flo Fulton (Katrina Bowden) has to get to him with the information first!

B&B Spoilers – Wyatt Cares Too Much

B&B fans who have been keeping up with what’s been going on lately know that Wyatt has bent over backwards to accommodate Sally’s desires. That’s because she has tricked Wyatt and everyone else that she’s dying of a mysterious disease (and even Sally doesn’t know what to call it). At Flo’s urging, Wyatt even brought Sally in to his home and allowed her to live with him until she made a romantic move on him. Like the good boyfriend he is, Wyatt was honest with Flo and told her everything that had gone on between he and Sally. Of course, Flo got angry. Most B&B fans sympathize. Who else wants their boyfriend’s ex-girlfriend living with him, trying to kiss him, and working her hardest to get him back … dying or not?

However, even though Wyatt agreed to kick Sally out after her audacious move, he eventually backed down when Flo wasn’t there to lend him her spine. Some believe that’s just because Wyatt’s a beta male in an alpha male’s suit. Others, however, stick up for Wyatt and suggest that his behavior vis-à-vis Sally is simply due to the fact that Sally may have fulfilled a very specific need in Wyatt’s life that other women haven’t.

The Bold and the Beautiful Spoilers: Wyatt Is Shocked When Quinn Takes Katie’s Side Regarding Flo And Sally https://t.co/o1uj3Sa9CI pic.twitter.com/DXSfAAwH0s

While Wyatt may genuinely believe with his mind that there were good reasons that he broke up with Sally, in his subconscious mind, he can’t let her go. In fact, it may not just be Sally’s not-so-subtle verbal manipulations that guilt trip him. Wyatt might feel guilty that he ever let Sally go in the first place!

B&B viewers know that how Wyatt sees Sally in his innermost mind will determine his response to her once he finds out she’s been lying through her teeth. Once Wyatt discovers that Sally has been taking advantage of their former relationship, and the connection they shared, and whatever goodwill he has left toward her, he’s bound to be furious.

However, there are yet those who believe that even with all the horrible things Sally has done, Wyatt may choose to simply forgive Sally despite his hurt and anger. Now, that might sound outrageous to some, but there’s a good reason a few B&B fans believe this.

It’s all about context. What’s the context of Sally’s lies? Why did she lie to Wyatt (and everyone else) in the first place? What were Sally’s motivations? While to some, motivation might not matter, it may to Wyatt. After all, Sally’s actions are ones of romantic desperation. Sally is a romantic fantasizer. To her, Wyatt is the epitome of all that’s wonderful, good and amazing. Wyatt is the person who Sally feels “completes” her. Wyatt is life! Wyatt is health! Wyatt is joy!

Of course that begs the question as to how Sally could do so much wrong to the person she supposedly loves more than anyone else on planet Earth. The answer to that question, is that Sally is obsessed. In her twisted view, Sally is willing to hurt Wyatt in order to get him back. No pain, no gain.

If Wyatt understands all that, he may be extremely angry with Sally for a time. However, if he’s really the sensitive type, he may find himself pitying her … and then one day forgiving her entirely.

B&B Spoilers – Wyatt Is Through With Sally

On the other hand, there are B&B fans who suggest that once Wyatt learns the truth, he could go all out in an attempt to cut ties with Sally completely. If Wyatt does, he may not stop with simply cutting ties. Wyatt might actually have Sally fired forever from Forrester Creations. B&B viewers may also see Wyatt bring both civil and criminal charges against Sally.

The bottom line is that Wyatt’s anger may be the hammer that drives the nail in the coffin Sally’s been slowly crafting for herself over the last few months!