EastEnders Spoilers: Chantelle locked In With Kheerat – Could She Confide In Him 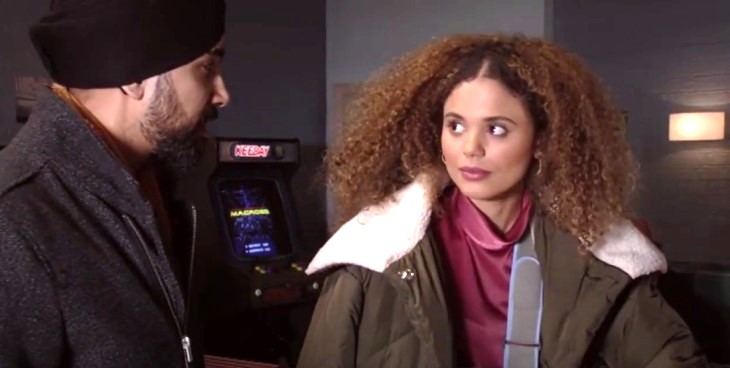 EastEnders spoilers hint that Chantelle Atkins (Jessica Plummer) may have a future relationship with Kheerat Panesar (Jaz Deol) when they get locked in. Chantelle and Kheerat have been getting along and have been working together. This has made fans wonder if Chantelle would confide in Kheerat about the abuse that she has been going through at the hands of Gray Atkins (Toby-Alexander Smith). The upcoming episodes may have the two become closer as they are forced to share a space with each other due to being locked in.

EastEnders Spoilers: Keegan Loses His Temper- Family Struggle On How To Help

As viewers know, Chantelle has been suffering from abuse at the hands of Gray. The stress from the Whitley Dean (Shona McGarty) case has weighed on Gray, causing him to lash out more often. This has led to Gray deciding to take his anger out on Chantelle. With the Whitley trial heating up, it is possible that Gray will become more aggressive with could result in more harm coming to Chantelle.

EastEnders Spoilers – Chantelle Atkins And Kheerat Are Locked In

Fans have noticed the chemistry building between Chantelle and Kheerat ever since the Panesars entered the scene last year. Fans have been hoping for Chantelle to confide in Kheerat and for the two to end up exploring a relationship with each other. However, Chantelle has decided to stay loyal to her abusive husband. When Gray lost his job as a solicitor at the firm back in March, Chantelle decided to get a job at Kheerat’s call center, which she had previously decided not to work there.

It could be the case that Chantelle may become tired of walking on eggshells around Gray and may want to let someone in on what is going on. In upcoming episodes of EastEnders, Chantelle will try to cheer up her stressed-out husband. However, things take a turn when Suki shows up and starts to question if Chantelle is even dedicated to the company.

This results in Kheert stepping in to stop his mother from going after Chantelle. While at work, Chantelle is contacted by an angry Gray who was not able to get in contact with her. The conversation was cut off as the power cut servers lost connection. This will leave Chantelle locked in with Kheerat as Gray tries to track her down. Could she decide to reveal what has been going on behind the scenes out of fear?

Viewers will see Chantelle and Kheerat locked in together, which may mean that the truth will be revealed, or maybe fans will see the two hooks up. What do you think? Will Chantelle reveal the truth? What might happen when Gray finds Chantelle? Watch EastEnders from Monday and Friday at 8 pm and Tuesday and Thursday at 7.30 pm on BBC One to find out what happens next.