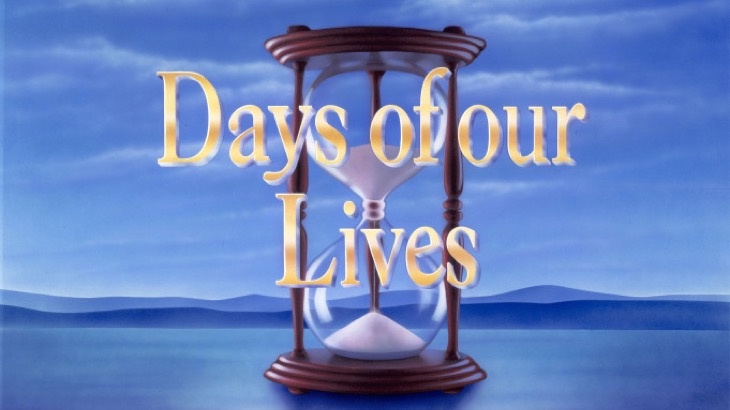 Days of Our Lives spoilers tease that viewers (and Salemites) should just believe their eyes when someone who looks EXACTLY like the late Stefan Octavius DiMera (Brandon Barash) shows up this week on Days of Our Lives!

Days of Our Lives viewers will recall Friday’s episode when Ben Weston (Robert Scott Wilson) had applied for a job at a garage, at Ciara Brady’s (Victoria Konefal) urging, after her motorcycle stalled and Ben diagnosed the problem as being with the carburetor. Ciara thought Ben would make an excellent mechanic and found an ad someone ran advertising for a mechanic.

Ben answered the ad, and tried to get the only person he could find in the shop, who was rolled underneath a car working on something from the bottom of it, finally rolled out and asked him what he wanted! The promo continues that scene, as the shop owner, named Jake Lambert, notes Ben’s raised eyebrow and shocked look and tells him “You look like you’ve seen a ghost!”

Doppelgängers or exact lookalikes of people have shown up in Salem many times before, but usually, Dr. Wilhelm Rolf (William Utay) and Stefano DiMera (Stephen Nichols) have been behind them, unless there has been a long-lost identical twin involved, which we have not seen in Salem although there have been at least two sets of fraternal twins, Rex Brady (Kyle Lowder) and Cassie Brady (Alexis Thorpe), the “Gemini Twins” and Eric Brady (Greg Vaughan) and Sami Brady (Alison Sweeney) and Marlena Evans (Deidre Hall) had an identical twin, Samantha Evans (Deidre Hall) but they grew up together and knew of each other, they had not been separated at birth. Ben is stunned to see how the shop owner, named Jake Lambert (Brandon Barash) looks exactly like his former employer and friend, Stefan, and tells someone he looks exactly like Stefan!

Also in Friday’s episode, Stefan’s widow, Gabi Hernandez DiMera (Camila Banus) was standing in front of her former business, Gabi Chic and thought she saw Stefan’s reflection in the window! Brady Black (Eric Martsolf) happened to come along and she absolutely freaked out to him, but he couldn’t stay and chat, although he tried to calm her down a little bit.

In the promo, Gabi sees who she thinks is Stefan again – standing in front of “The Bistro” as she is coming out of the Salem Inn! She gasps and faints, as Jake spots her and rushes over, rouses her, and asks if she’s all right! This, of course, may make her think that she is losing her mind!

Days Of Our Lives Spoilers: Kristin’s Vicious Behavior Shocks Brady – Realizes Her Dark Ways Are Not In The Past https://t.co/YcZEu3ZuSn pic.twitter.com/108bJnfbel

She is at a low point in her life at this time and had gone to talk to Stefan at his grave, and told him how she had lost her job as CEO of DiMera to Chad DiMera (Billy Flynn) and lost her business, Gabi Chic, having found out that Chad and Li Shen (Remington Hoffman) had not only fired her, but taken away her business from her too, and she also has to find a different place to live, being kicked out of the DiMera mansion!

It is indeed, a stressful time for Gabi but she will find out she’s not seeing a ghost, but only a lookalike, who most likely is a twin that Sam Maitlin aka Stefan Octavius DiMera never knew he had, and maybe Vivian didn’t either; it could have happened at birth!