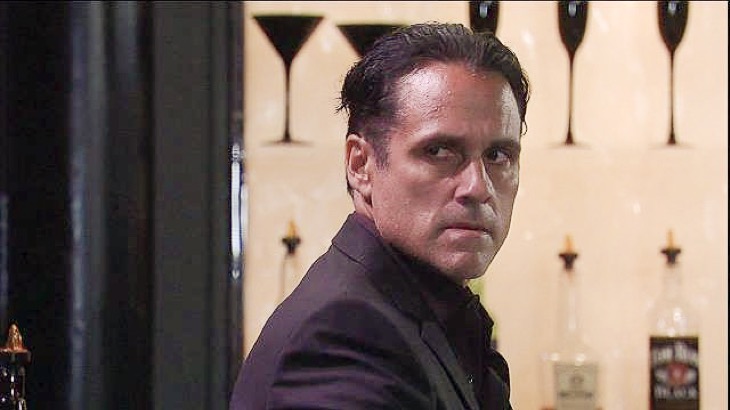 General Hospital spoilers tease that Sonny Corinthos (Maurice Benard) may go off the rails and all out for revenge against Cyrus Renault (Jeff Kober) when Mike Corbin (Max Gail) dies, blaming him for Mike’s rapid deterioration in upcoming episodes of GH!

General Hospital viewers will recall that Mike started his rapid downhill slide when the attack happened at the bar in Bensonhurst, where Sonny and Jason Morgan (Steve Burton) had taken him, hoping he would remember more being at a place where he spent a lot of time back in his younger days. But it all went south when the bar was attacked by several gunmen, Sonny and Mike being the main targets although Jason dodged plenty of shots as well!

Mike was terrified, as he laid under a table on the floor and Sonny tried to shield him and keep him still as well, because as viewers will recall, he was shaking violently. Sonny and Jason had brought him to New York City to enroll him in an Alzheimer’s trial involving stimulation of the brain with radio waves to stimulate memory. In last Thursday’s GH episode Sonny noted to Jason as they talked about Mike that his rapid deterioration started at that point, and he was unable to get him into the trial because of it.

Sonny Corinthos Has Too Much On His Plate

Sonny has too much on his plate – he’s trying to stay cool, calm, and collected but his father’s rapid decline from maybe late stage two into stage four, and being urged to set up a DNR for him (Do Not Resuscitate) order and palliative care (meaning medically, all that is done for the patient is comfort care) has affected him deeply. On top of this Cyrus is on the loose and trying to take over his territory, and has been moving drugs through Port Charles, and Sonny won’t stand for that!

Long ago, Sonny saw what drugs can do to a life and how people are destroyed by drugs, and he decided then and there that he would no longer involve illegal drugs in his business. Sonny knew that some of his poor decisions involving pushing drugs when he was younger led indirectly to Stone Cates’ (Michael Sutton) death from AIDS and Robin Scorpio-Drake’s (Kimberly McCullough) developing HIV as a result of their involvement, and that is when he did a turnaround and became firmly against drugs, and when he later became a father the first time that only entrenched his decision.

Many of Sonny’s bad decisions I the past were caused by bipolar disorder – he should know better than to go off his meds, but not all depression and grief is caused by bipolar disorder, even if someone has the diagnosis. Of course Sonny is going to grieve, he is going to be angry, and he is probably going to be depressed even if he does stay on his meds and it is going to be very overwhelming for him. It has not been that long since Morgan Corinthos (Bryan Craig) died, and he was affected by Drew Cain’s (Billy Miller) disappearance because he got attached to him when it was thought he was Jason before Jason returned.

He was affected by Kiki Jerome’s (Hayley Erin) death as well, even if he didn’t show it – Kiki had been married to Morgan for a short time, and was at the Corinthos house frequently taking care of or visiting her little half-sister Avery Jerome-Corinthos (Ava and Grace Scarola). Grief, anger, stress, and almost any type of emotion can build up in a person if not expressed through talking or actions, punching a punching bag being a good stress reliever and to get one’s anger out – we know Sonny’s done that. He owns the gym! It won’t be surprising at all to see Sonny go off the rails and strike back at Cyrus with deadly force – and not just shoot him, but perhaps hold him hostage for a while so he can watch him suffer! He will want Cyrus to suffer the way he has and the way Mike has!