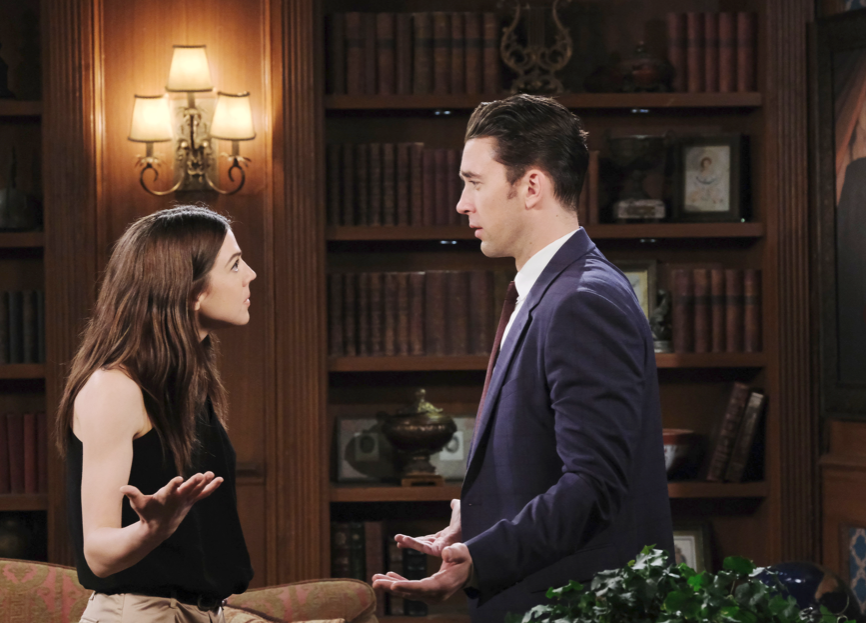 Days of Our Lives (DOOL) spoilers tease that Abigail DiMera’s (Kate Mansi) mental illness may be coming back, as she has begun to have visions of Ben Weston (Robert Scott Wilson). As viewers know, Ben suffered from his own bout of mental illness and was actually the Necktie Killer who terrorized Abigail and killed three other women. Ben has since gotten better as well, but will the ramifications of his past actions still haunt Abigail?

DOOL Spoilers: Abigail has had mental issues herself

As viewers know, it wasn’t all that long ago that Abigail’s personality fractured after she accidentally killed Andre DiMera (Thaao Penghlis). Abigail eventually recovered, and her personalities integrated. But has the stress of Steve Johnson (Stephan Nichols) believing himself to be Stefano DiMera (the late Joe Mascolo) caused her to relapse? Or is something else going on? Spoilers indicate that Chad DiMera (Billy Flynn) and Abigail will soon learn that she has been drugged. But will Abigail be able to recover?

Days Of Our Lives Spoilers: Sarah Tries To Rebuild Her life After Baby Swap – Can A New Baby Ease Her Pain? https://t.co/6ScElU9VHs pic.twitter.com/FHCt1ApIWQ

Drugged or not, could these visions of Ben cause Abigail to be a danger to herself or to others? Could she actually do harm to Chad, believing him to be Ben? Since she once killed Andre, she is more than capable of taking someone’s life during her bouts with mental instability. Could Abigail once again have to be institutionalized? Although the drugs are the cause of the initial visions, could this all be more than Abigail can bear?

Days of Our Lives Spoilers: Abigail will fight for her sanity!

There is no doubt that Abigail will fight to keep her sanity, but will it be a losing battle? Gabi Hernandez (Camilla Banus) recently warned Chad that it was only a matter of time before Abigail or one of her personalities returned to create havoc. Although it’s doubtful that Gabi is the one who drugged Abigail, could she be more right than even she realizes. Hopefully once the drugs wear off, Abigail will return to being herself or there could be a lot of trouble coming for both Abigail and Chad!

Will Abigail’s visions of Ben wear off once the drugs are out of her system. Or is this just the beginning of Abigail’s troubles? Could her alters return? Will Abigail have to be institutionalized? Only time will tell, so stay tuned to Days of Our Lives airing weekdays on NBC. And don’t forget to check back here regularly for all your Days of Our Lives news, information and spoilers!