Days of Our Lives Spoilers: Brady Goes To Extremes To Protect Kristen And Takes The Rap 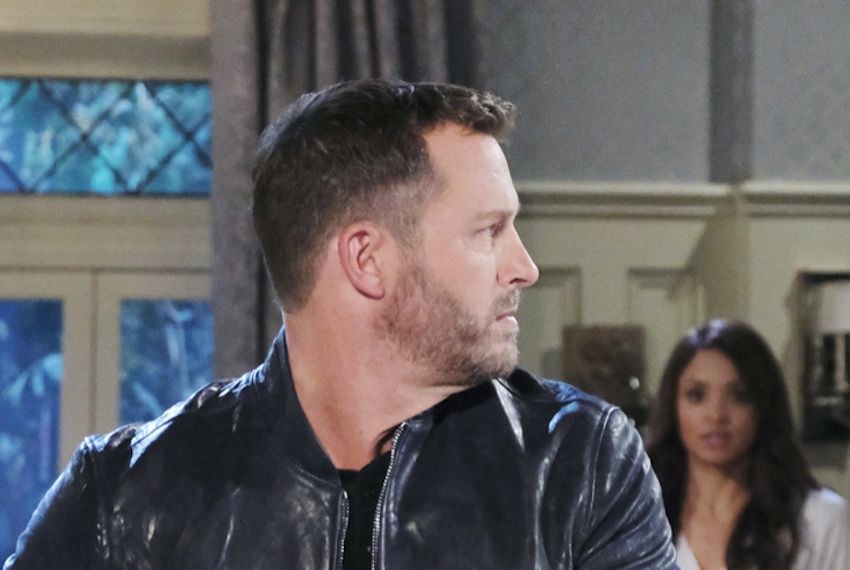 Days of Our Lives spoilers tease that Brady Black (Eric Martsolf) will go to extremes to protect Kristen DiMera (Stacy Haiduk) and will take the rap for the stabbing of his grandfather, Victor Kiriakis (John Aniston) in an upcoming episode of Days of Our Lives!

DOOL Spoilers: Kristen DiMera, Overcome With Anger At Victor Kiriakis, Goes To The Kiriakis Mansion And Stabs Him

Days of Our Lives viewers will recall that in Friday’s episode, Kristen, overcome with anger at Victor for his part in the baby swap, went to the Kiriakis mansion with deadly intentions; Victor tried to talk her down and assured her that her baby would be returned and that she didn’t have to worry. She angrily asked why should she believe him, and the argument escalated until she grabbed a weapon of opportunity – a knife laying on a fruit and cheese tray – and stabbed him with it! At some point later she went to the police station where Brady had still been waiting on word about Sarah Horton’s (Linsey Godfrey) location and progress on bringing her and Brady and Kristen’s baby, Rachel Black (Josephine and Rosalind May) back to Salem.

Meanwhile, Sonny Kiriakis (Freddie Smith) arrived home and found Victor unresponsive and bleeding, and called 911. Brady hears about the stabbing and immediately thinks he knows what happened, and takes Kristen somewhere private where no one else can hear them, and asks her if she stabbed Victor; she finally confesses. Brady, of course is horrified, believing that Kristen’s murderous rages were in the past, but considering he was tempted to kill his duplicitous grandfather himself, tells Kristen he can’t blame her. That is the main reason that Brady decides to cover it up and protect her, instead of doing the right thing and having her accept what she did and go again through the prison system.

Kristen starts to come unglued, the truth of what she had done hitting home. Brady promises her he will take care of everything, and kind of puts himself inside a protective shield of icy sentiments and concludes that Victor had it coming for a long time, and if not from Kristen, from someone else. Brady’s definitely not on the side of the Salem Police Department, and he’s not going to turn Kristen in – he wants to protect her, and that leads to some twists and turns as he contemplates how he’s going to do it. The first thing he has to do is go back to the scene of the crime, and goes to the living room where Kristen said he had been sitting – of course in his favorite chair where he always sits – to destroy the evidence. He finds the knife, and tries to get rid of it.

Because he knows the grounds and the mansion and the layout, he’s able to bypass the police, who by this time have arrived, and gets into the room, but it’s too little, too late. Eli Grant (Lamon Archey) and Lani Price (Sal Stowers) who have recently been rehired by the Salem Police Department, catch him in the act, with the knife in his hand! It gets even more complicated for Brady from that point, even though he tries to cover with wanting to know what happened to his grandfather and wanting to see for himself. Eli and Lani haul him back to the police station, where Kristen, who is still there, cries out that there is no way that Brady could have stabbed Victor; a curious Eli asks her to explain further, but Brady shushes her.

Brady confesses to the crime – and likely in front of Kristen. He falls on the sword, so to speak, to save his beloved, because she has such a long rap sheet she would never get out of prison. She would have the book thrown at her and possibly even charged with past crimes where the police didn’t have enough evidence at the time, to make sure she wouldn’t ever be free again. Brady can’t live with that possibility and figures attempted manslaughter might be the most he could be charged with – that is, unless Victor were to die. But even if he did, which would put Brady at murder one – he feels like Kristen has already been through the wringer too many times already, and he doesn’t think that’s fair after coming so close to happiness.

However, can they ever have the happy family that she wanted with Brady doing time for a crime that SHE committed? Now everything they dreamed of seems impossible again, and the stabbing of Victor can’t help but haunt the couple and play a giant role in whether they will ever be a family or not!