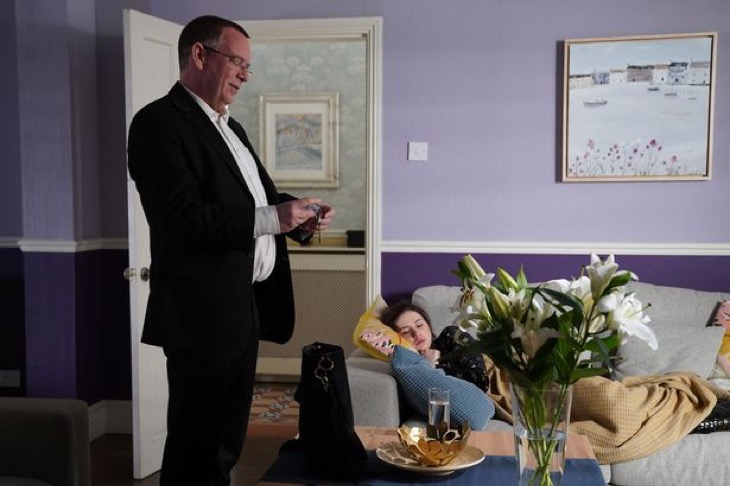 EastEnders spoilers hint that Ian Beale (Adam Woodyatt) will begin to target Dotty Cotton (Milly Zero) before she has a chance to expose him. However, his planning will be interrupted as he gets horrible news about his son, Bobby Beale (Clay Milner Russell). This will throw things off for him and may throw a wrench in his plans. How will Ian decide to handle things?

EastEnders Spoilers: Jacqueline Reveals How She Felt When EastEnders Episodes Were Cut – Realized How Serious Virus Was

Ian has been keeping a secret that could ruin his friendship with Sharon Mitchell (Letitia Dean), as he has played a part in her son’s, Denny Mitchell (Bleu Landau), Death. As viewers know, Ian locked Denny into a room on the boat before it went down. He managed to get him out of the room, but Denny still died that day. Some may argue that Ian played a big part in Denny’s death, while some say that he did not really kill him as he was just acting as a father. Either way, he is not being honest about the part that he played in Denny’s death, and Sharon deserves the truth. The truth is what she may receive since Dotty is determined to let the truth be known when she feels that Sharon is well enough. However, Ian will want to stop Dotty from telling Sharon the truth.

After receiving another warning from Dotty of what her intentions are, he may decide to go after Dotty once again to keep her quiet. However, he will be interrupted by horrible news as Bobby, who went out with Peter Beale (Dayle Hudson), Lola, and Dotty will pass out.

After passing out, he will be in a bad way. It is possible that this is due to the accident that he had beforehand. However, this will catch Ian’s attention as he goes to get the word about his son’s health.

Viewers will see Ian become more worried about the truth coming out as Dotty decides to tell Sharon what she knows. However, Ian may not be able to stop her due to Bobby’s sudden health scare. What do you think? Will Ian stop Dotty, or will Dotty tell Sharon what she knows? Watch EastEnders from Monday and Friday at 8 pm and Tuesday and Thursday at 7.30 pm on BBC One to find out what happens next.