Days of Our Lives Spoilers: Steve Is Released From The Hospital And Moves In With Hope – Kayla Finds Herself A Little Jealous 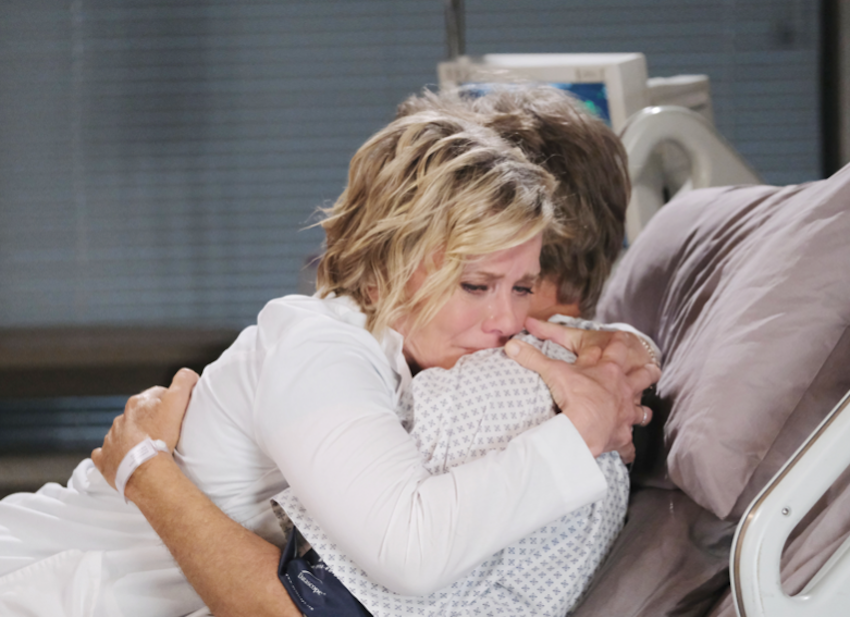 Days of Our Lives spoilers tease that Steve Johnson (Stephen Nichols) is released from the hospital and moves in with Hope Brady (Kristian Alfonso) – and Dr. Kayla Brady (Mary Beth Evans) finds herself a little jealous in an upcoming episode of Days of Our Lives!!

As Days of Our Lives viewers will recall, Steve and Hope have bonded over their similar experience as well as some memories in common. Both spent time as criminals thanks to microchips that had been implanted in their brains, and both had some memories in common as well. Steve originally had lost his eye in a knife fight with Bo Brady (Peter Reckell) who of course was Hope’s husband for many years, both have law enforcement in common and Steve rescued Hope from more than one serious situation where she had been in danger over the years. Steve made the arbitrary decision to let Kayla continue on with Justin Kiriakis, (Wally Kurth) feeling he was too dangerous since he had done the things he did while under the influence of the microchip in his brain that had turned him into Stefano DiMera (Stephen Nichols) for several months.

Steve didn’t want to impose on John Black (Drake Hogestyn) and Marlena Evans (Deidre Hall) either for a place to live, and besides, he had done harm to them under Stefano’s influence too; and Jack Deveraux (Matthew Ashford) hadn’t offered him a place to live and he hadn’t asked. Hope offered, and he accepted. Hope is the one person Steve didn’t hurt as Stefano, and Steve is the one person Hope didn’t hurt as Princess Gina Von Amberg (Kristian Alfonso).

Days Of Our Lives Spoilers: Someone Hospitalized For Hallucinations: Gabi Or Abby? https://t.co/l09Ppadb3j pic.twitter.com/60hMMgffpX

Dr. Kayla Brady Goes To Get The Release Papers And Is Informed Steve Johnson Is Going To Live With Hope Brady

Kayla goes to get the release papers for Steve to be released from Salem University Hospital and Hope wants the aftercare instructions, which is when Steve tells her he will be staying with Hope. Kayla is a bit taken aback but doesn’t think anything is going on between the two other than that Hope has a big house with plenty of space for Steve. Her kids are grown and out on their own including Ciara Brady (Victoria Konefal) and Hope is all alone in that big empty house – the thought of Hope being all alone in that big empty house and Steve moving in with her starts to eat at her a little bit after they have gone, and over the next few days.

Kayla finds herself a little jealous and wondering things that she probably shouldn’t be wondering, and fights curiosity that they may be sharing a room or even a bed! But then she keeps telling herself the big empty house of Hope’s means that there is plenty of room for Steve to possibly even set up an apartment of his own in part of it! Besides, Steve didn’t have anywhere else that he felt comfortable going, and it will take a while for that eye socket to heal properly! He shouldn’t be alone during that process!