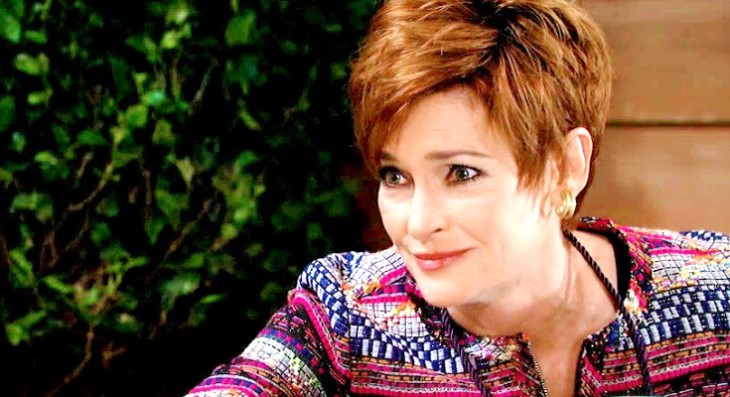 General Hospital (GH) spoilers suggest that the Corinthos family might need to get a new attorney. That’s because Diane Miller (Carolyn Hennesy) may not be the amazing phenom that Michael Corinthos (Chad Duell), Carly Corinthos (Laura Wright), or Sonny Corinthos (Maurice Benard) think she is. GH fans know that when it comes to Michael’s child custody case, Diane’s advice has been less than stellar.

Some GH fans may be scratching their heads when it comes to the advice given by the Corinthos family lawyer, Diane Miller. That’s because most of her advice regarding Michael’s upcoming child custody hearing centers around bolstering Michael’s image as an upstanding citizen of Port Charles and presenting the judge with the idea that Michael’s is a picture perfect home for Wiley Cooper-Jones (Erik and Theo Olson).

However, one of the very first things the court will consider is who the primary caretaker of Wiley has been up until this point. The answer is that it sure hasn’t been Michael. It hasn’t been Nelle Benson (Chloe Lanier) either! For a year and a half since Wiley’s birth, the toddler’s primary caretakers were Lucas Jones (Ryan Carnes) and Brad Cooper (Parry Shen). While GH fans know Brad is currently in jail, the court would look to Lucas above and beyond either Michael or Nelle. Why?

Has anyone seen Diane or anyone else for that matter discuss paperwork transferring legal custody of Wiley to Michael? Just because it was discovered that Brad perpetrated a crime vis-à-vis a child switching scheme and Wiley is Michael’s biological son, it doesn’t follow that Wiley would immediately be placed in Michael’s care.

First of all, Lucas had no idea a crime had been committed. Even if the State of New York took Wiley away from Lucas due to Brad’s crime, the state wouldn’t necessarily place him with Michael … at least not right away. Yet GH viewers saw Wiley go from Lucas to Michael in two seconds flat!
Where’s the paperwork?

And, isn’t it in the child’s best interest to have Lucas remain in his life? Surely, the court would ask this question. The fact that Diane dropped the ball here is unforgivable.

GH fans might also know that Wiley’s living situation is linked to the question about who Wiley’s primary caretaker has been for most of his life. Even if GH fans were to ignore the fact that Lucas and not Michael was the kid’s primary caretaker, the court is going to ask how long Wiley has been living with Michael.

Oh, Wiley has only been living with Michael a month at most? Well, that sure doesn’t place Michael much ahead of Nelle!

Well, what about when the court asks about Michael and Nelle’s physical and mental health? What about their respective criminal backgrounds? First of all, even without Michael marrying someone “pure” to make his image better … his background is already a heck of a lot cleaner than Nelle’s. That’s despite the fact that Michael committed manslaughter as a teen.

But, Diane pushes Michael to marry less than a week before his child custody hearing? What is she thinking?

The truth is that any basic New York attorney could have told Michael the things that the family court would look at when making a determination concerning who gets custody of Wiley. Diane skipped past some majorly important things to zoom in on Michael’s image … when that’s hardly the most important factor in this specific case.

GH fans might agree that yet another thing Diane glossed over is the question of whether Michael and Nelle are willing to compromise with each other. The truth is … Michael believes Nelle is the devil and Nelle simply wants to hurt Michael in any way she can. Their fight over Wiley is incredibly acrimonious.

The judge then has to ask … is it really in Wiley’s best interest to be awarded to either of these GH characters? At this point, it literally doesn’t matter if Michael’s married to the snow-white, Willow Tait (Katelyn MacMullen) or not.

If Diane doesn’t come up with a plan to address the very real issues listed above (especially concerning Lucas Jones), then Michael’s going to lose. Before that happens, Michael should fire Diane, work to make peace with Nelle while he can, bring Lucas into the picture, and forget about Willow altogether.