General Hospital Spoilers: Nelle Rips Into Willow, Sasha And Carly All in One Afternoon 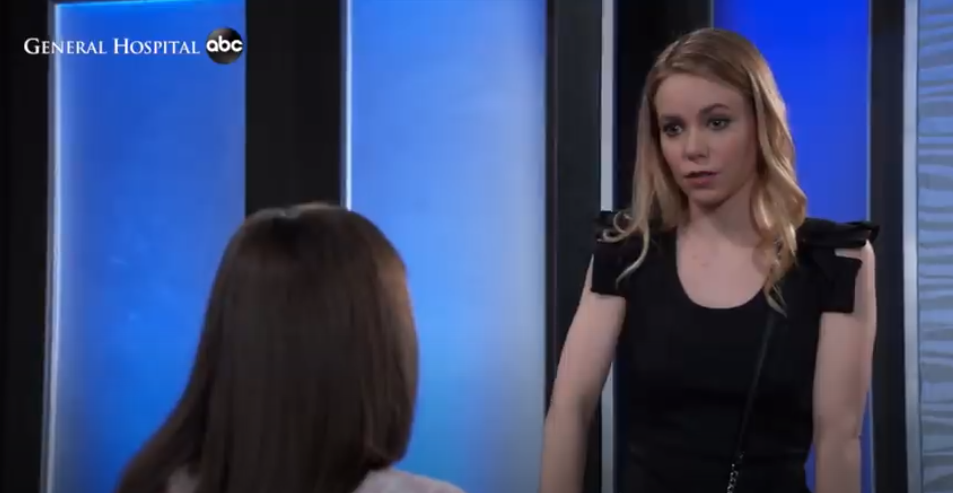 GH fans would have to have their heads in the sand if they didn’t already know about the fake affair that Harrison Chase (Josh Swickard) and Sasha pulled on Willow and Michael Corinthos (Chad Duell). Well, Nelle didn’t have her head in the sand. As soon as she discovered that Sasha had apparently cheated on Michael with Chase, she didn’t waste a second. Nelle made sure that she was able to encounter Willow at a time when Willow was sure to be emotionally vulnerable. (Of course, many might ask when Willow has NOT been emotionally vulnerable.)

In any case, Nelle began by being sickeningly sweet. Viewers watched as she tried to imply that she and Willow had common ground. After all, Chase has dated them both. Still, once Nelle realized that Willow was not going to allow her to play her game wherein she demonized Chase, Nelle lit into Willow personally. Although mean, some GH fans couldn’t help but get a kick out of what amounted a heck of a lot of chutzpah on Nelle’s part.

While GH viewers knows that Sasha and Chase didn’t really sleep together, neither Nelle nor anyone else knows that. (Okay, Hamilton Finn [Michael Easton] knows, but that’s it.) In light of that fact, Sasha has tarnished her reputation in Port Charles. After all, Michael is known as a stand-up guy who is a badass CEO at a super young age and he’s well liked my many. Therefore, the fact that Sasha didn’t break up with him up front and honestly before moving on to a physical relationship with Chase will reflect poorly on her with just as many.

Nelle knows this. Viewers watched the dastardly sociopath slam Sasha as a scheming slut. Of course, while Nelle has no room to talk, many GH fans still thought it was fun to watch Sasha be emotionally smacked around a little. Considering her stupid plan to push Willow into Michael’s arms hurt both Michael and Willow badly … some think Sasha deserves whatever she gets. The fact that it was Nelle dishing out some verbal punishment was just a little insult to injury.

General Hospital Spoilers – Nelle Catches Carly on the Flip Side

Now, while a big screaming match between Carly and Nelle might have been fun, it was just as enjoyable to watch Nelle sling some arrows Carly’s way as she left the Metro Court. Some GH fans might agree that Carly has been just as manipulative in her own way as both Sasha and Nelle. When viewers have seen Nelle compare herself to Carly … a lot of fans have found themselves nodding their heads in agreement! Despite Carly’s intense denials, the truth is that she and Nelle are more alike than Carly cares to admit.

Some GH fans agree that seeing Nelle cut through Carly’s shield of hypocrisy in two seconds flat was amazing! Now that viewers have watched Nelle victoriously leave a path of mayhem in her wake, one has to wonder if things are being set up for the moment when she walks out of family court with Wiley Cooper-Jones (Erik and Theo Olson) as the prize.