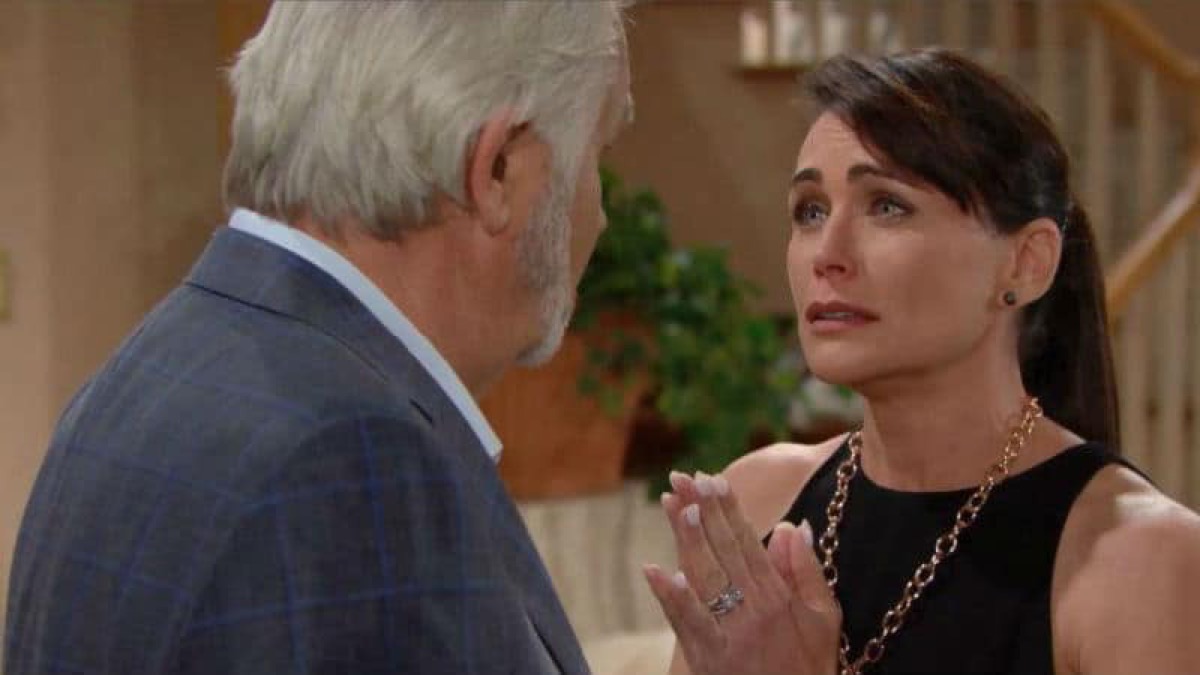 The Bold and the Beautiful spoilers tease that Eric Forrester (John McCook) is already miffed at Quinn Forrester (Rena Sofer). He remains dismayed that his wife would intentionally seek to damage Brooke Logan’s (Katherine Kelly Lang) life and impact her already fragile marriage to his son, Ridge Forrester (Thorsten Kaye).

Quinn continues to stand her ground, saying that Brooke revealed herself through her actions. Sofer’s character also believes that Ridge and Katie Logan (Heather Tom) are better off knowing what their presumed soul mates did and then chose to hide.

Bold And The Beautiful Spoilers – Brooke Logan Divides Another Couple

As B&B fans recall, Brooke took comfort in Eric’s arms in the recent past. No one recorded that event, but if Shauna Fulton (Denise Richards) had she would have documented a warm embrace between the one-time Beric.

Brooke and Eric didn’t kiss, but reaffirmed the continued significance of their personal history. Yes, Ridge is Brooke’s true love. But Eric arguably occupies second place in her heart.

Quinn detests Brooke. Sofer’s character recognizes that Eric remains fond of her. McCook’s character has also been open with his wife about the special connection he and Lang’s character share, while also saying that it doesn’t affect Queric.

Eric flat out told Brooke that he loved Quinn and wasn’t going to divorce her. That came before the cabin kiss upload and before he knew that Quinn purposely fed Brooke alcohol without her knowledge.

Already questioning Quinn’s ethics, Eric will be stupefied when learning that his wife tried to push Brooke off the wagon. And with that Queric would be done, with Quinn suffering the delayed consequences of her own actions.

Bold and the Beautiful Spoilers: Thorne And Shauna Romance Could Happen – 5 Reasons Why Ingo Rademacher Needs To Come Backhttps://t.co/8Nl9KK1Gxf

Quinn made a major tactical error when she told Thomas Forrester (Matthew Atkinson) that she spiked Brooke’s juice bottle with alcohol. Eric’s wife and grandson were fully in sync in wanting to oust Brooke from the family at that point in the storyline.

Thomas left his failed wedding to Zoe Buckingham (Kiara Barnes) holding no ill will toward Quinn, who hadn’t wronged, or spoken against him. And there doesn’t need to be conflict between Thomas and Quinn when he returns in order to force a reveal.

Instead, a simple conversation between both characters about the alcohol spike could be overheard by Eric, fueling his fury and demand to divorce.