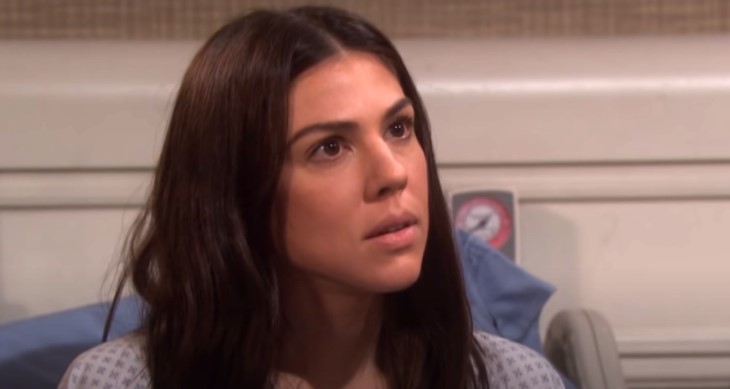 Days of Our Lives spoilers reveal that Abigail DiMera (Kate Mansi) has been drugged. Even after it’s out of her system, she continues to hallucinate. This leads her to be hospitalized, but then something happens. Chad DiMera (Billy Flynn) is informed that his wife has disappeared from the hospital and nobody can find her. Where is she and is Abigail in danger?

DOOL spoilers reveal that the reason for Abigail’s hallucinations is because she was drugged without her knowledge. We haven’t been told the name of the substance, but fans did learn that it is a hallucinogen. Given to someone who already has a predisposition for hallucinations and it can make their mental state even worse.

Days of Our Lives Spoilers: Kristen May Cost Lani Her Job, Lover, and Freedom?

Days of Our Lives spoilers reveal that the drug altered Abigail’s brain chemistry and that is why her hallucinations continue. Not only does it cause visual and auditory hallucinations, but she will struggle with figuring out what is fantasy and what is reality. This leads her to get admitted to a psychiatric hospital in order to get her well again.

One thing that fans need to be aware of is that her current medications work with the brain chemistry that she had prior to being drugged. Since the substance altered her brain chemistry, it means that the medications are no longer effective. A simple dosage adjustment can work, or she might need entirely new medications.

That means whoever did this to Abigail caused long-term consequences for her mental health. It goes beyond just temporarily drugging someone.

It is confirmed that during May sweeps, Abigail will go missing from the hospital. Nobody knows where she went or why. With her declining mental health, this could prove to be dangerous.

Will she end up in danger or could she attack someone while having one of her delusions? We will have to keep watching the soap to find out. Be sure to catch up on everything happening with DOOL right now. Come back here often for Days of Our Lives spoilers, news, and updates.