General Hospital Spoilers: Molly Tells Brando Goodbye – But How Long Can She Stay Away? 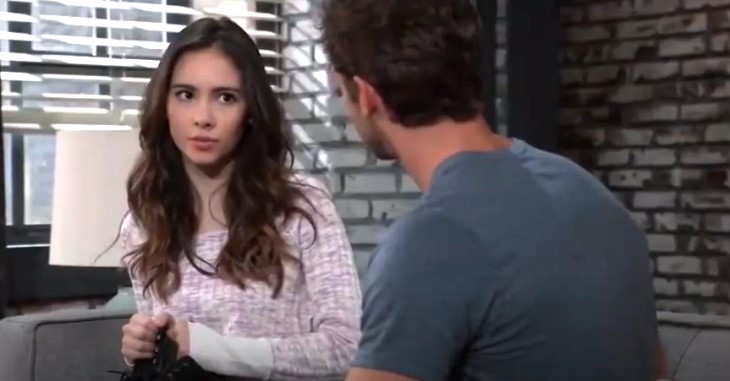 General Hospital (GH) spoilers suggest that Molly Lansing-Davis (Haley Pullos) might be saying “Goodbye” to Brando Corbin (Johnny Wactor) with her mouth, but is she saying the same with her heart? Some GH fans believe that Molly might be conflicted internally over whether or not she wants to truly remain in a relationship with her boyfriend of ten years, TJ (Tajh Bellows).

GH fans know that Molly was recently up at Charlie’s Pub where she met with her sisters, Sam McCall (Kelly Monaco) and Kristina Corinthos-Davis (Lexi Ainsworth). There, she confessed to her sordid, one-night-affair with Brando. Viewers know that both Sam and Kristina were shocked that the normally conservative Molly had behaved in the manner she did.

While the skanky Kristina was ready to give Molly high fives for cheating on TJ and came up with a million ways that Molly might justify her actions, Sam, on the other hand, was more realistic. Yes, Molly was operating under false assumptions, and yes people make mistakes … but everything really came down to whether Molly wanted to remain with TJ or not.

Because of that guilt, GH fans know that Molly told her sisters that she planned to confess everything because her relationship with TJ couldn’t be based on a lie. However, viewers know that at least for now, Molly’s keeping her mouth shut.

After leaving TJ up at Charlie’s Pub, presumably so that she could go get some errands done before the evening, Molly went straight to Brando’s garage. There, it seemed Molly just wanted to be sure that Brando really understood that things between them were over and that they would never see each other again. The thing is this … Brando had repeatedly told her that it was okay, he wasn’t going to make problems for her, he wasn’t going to tell anyone what they had done, and he would stay away from her.

Now, here was Molly once again repeating herself. To top it off, she seemed like she didn’t mean a word that was coming out of her mouth. It was more as if, she was telling Brando the things she, herself, expected to say … but in her heart, Molly wanted to say something completely different.

Many GH viewers believe at this point that Molly is simply very confused. On the one hand, Molly has the considerations of a ten-year relationship with TJ. It’s clear she loves him, but that doesn’t mean Molly is still as in love with him as she feels she needs to be to have a domestic partnership with him. On the other hand, Brando represents a side of herself that Molly hasn’t allowed herself to ever explore before. When it comes to Brando, Molly might feel that there’s something attractive about letting go and seeing what new experiences she might be able to have.

The truth is, Molly will probably try to keep her relationship with TJ going. However, if she isn’t able to forget about Brando or if she ruminates and allows herself to fantasize about him … Brando’s just going to take up more and more of Molly’s mental real estate. If that happens, eventually TJ is going to notice and things could get even dicier for Molly than they are already.

The bottom line is that many agree that Molly shouldn’t have allowed herself to sleep with Brando in the first place. Now that she has, however, Molly just might have opened up Pandora’s Box.