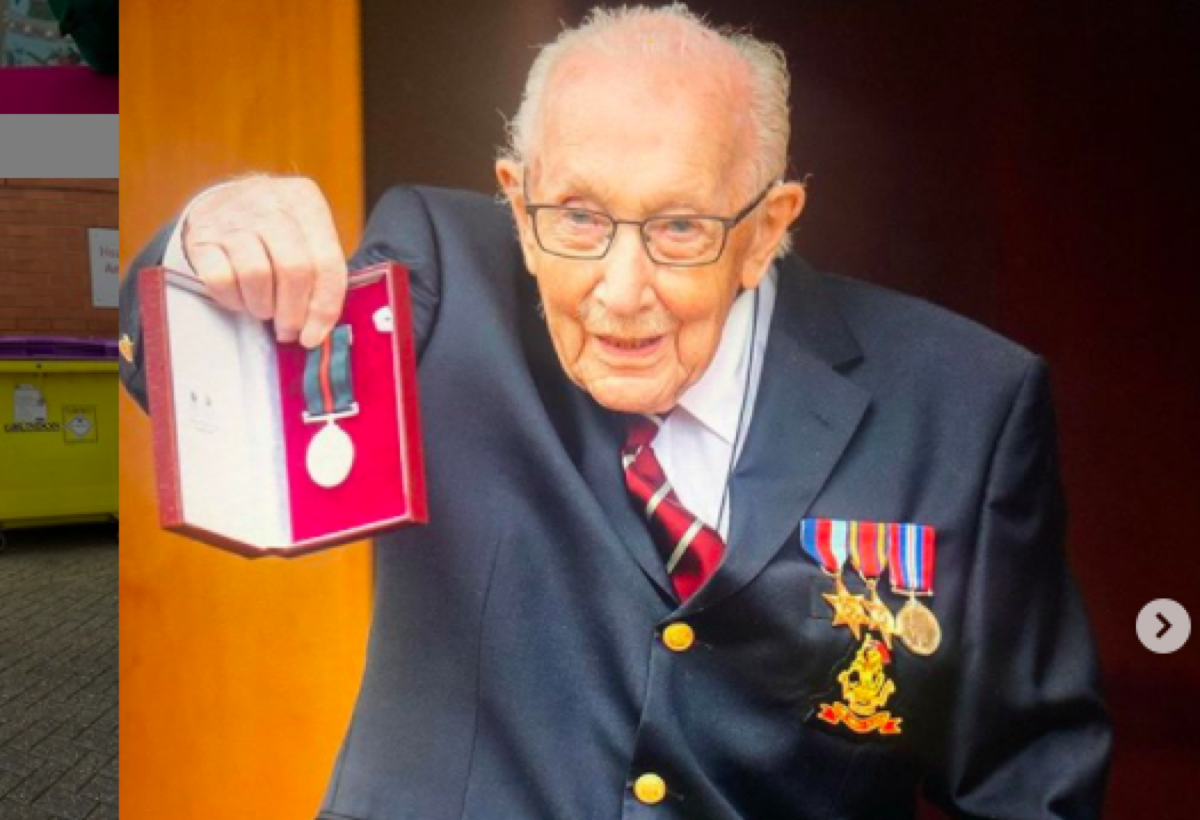 The much-celebrated Captain Tom Moore turned 100 on Thursday and for that he was recognized by several members of the royal family.

The fantabulous creation included an edible figure of Moore standing atop the cake, decked out in a black suit and walking with his stroller while surrounded by red poppies.

Other decorations included the union jack flag, several NHS badges, miniature newspaper articles and a gold photo frame with a picture of Tom inside. The pic shows him as an army captain.

Who Is Captain Tom And Why Is He Famous?

Moore, a WWII vet, has captured the country’s heart and soul following his effort to raise money for charity.

His initial goal was to raise £1,000 by walking his 25m garden 100 times before he turned 100. His mission set off a charitable streak among the public and to date his efforts have resulted in more than £30million being raised for the NHS.

Moore is also a music chart-topper following his widespread exposure. The vet recorded a version of You’ll Never Walk Alone with Michael Ball, and the song made it to number 1 in the charts.

Sarah’s cake had this message on it, “Happy birthday Captain Thomas, with love to all your family, from the York family.”

Royal Snub: How Edward Was Denied Honour Given To Charles and Andrew https://t.co/BfPsb0CtrC pic.twitter.com/lsp4nEBh6a

Additionally, Sarah said in a statement, “Captain Tom is a total inspiration. What an example of steadfastness and courage he sets to the rest of us. I know from my own work to get tokens of thanks to NHS workers around the country that he is inspiring others. My family just wanted to send him a small token of our appreciation. Happy birthday Captain Tom.”

Moore Has Been Recognized Far And Wide For His Fundraising Efforts

The cake wasn’t Moore’s only recognition from royalty. On Thursday the queen made him an honorary colonel! The 94-year old queen also sent the veteran a personalized card.

Lt. Col. Thomas Miller, commanding officer of the 1st Battalion The Yorkshire Regiment, had the honor of informing Moore of his promotion. In a letter presented to him by at his home, Moore was heralded for his, “mature wisdom, no-nonsense attitude and humour in adversity make him an inspirational role model to generations young and old.”