Days of Our Lives Spoilers: Hallucinogen Developed By DiMera – Who Drugged Abigail and Why? 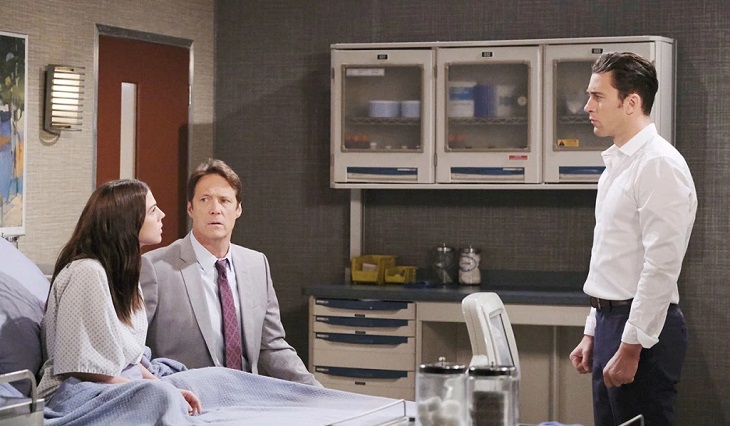 Days of Our Lives spoilers reveal that there is more information regarding the drug that was found in Abigail DiMera’s (Kate Mansi) system. We know already that it is a hallucinogen, but head writer Ron Carlivati explained that it is also a drug being developed by DiMera Enterprises. So, who had access, and who knew about the drug in the first place? Who drugged Abigail and why?

Days of Our Lives Spoilers: Hallucinogen Has Long-Term Effects

DOOL spoilers reveal that the substance that Abigail was drugged with isn’t any normal medication. It’s not even approved by the FDA yet. What is known per Soap Opera Digest is that the hallucinogen is currently being developed by DiMera Enterprises.

While this doesn’t exclude Gabi Hernandez (Camila Banus) from obtaining it, that detail does narrow down the suspect list.

Days Of Our Lives #DOOL Recap & Spoilers Friday, May 1 2020: Rex Threatens To Call The Police On Sarah; Victor Wakes Uphttps://t.co/wN5loRGqzN

Gabi seems surprised that everyone thinks she drugged Abigail. She expects the accusation from Chad DiMera (Billy Flynn). However, Gabi found herself stunned when asked by two other people if she had anything to do with it. One was her own brother, police commissioner Rafe Hernandez (Galen Gering). The other was her mentor/friend/frenemy Kate Roberts (Lauren Koslow).

Honestly, it wouldn’t be the first time Gabi has tracked down what DiMera Enterprises is working on and used it to her benefit. This is how she discovered the exploding pacemaker and had it put in Julie Williams’ (Susan Seaforth Hayes) body.

Days of Our Lives Spoilers Next Week: The Suspect List

Days of Our Lives spoilers reveal that there are a lot of people in the DiMera company and family that could be responsible. Gabi isn’t the only one. Chad could have drugged his wife himself or it might even be someone off-canvas. Has anyone considered Vivian Alamain (Louise Sorel)? She is due to come back soon and this would be right up her alley.

Days Of Our Lives Spoilers: Xander Confesses to Victor, Who Gets Ultimate Revenge For Betrayal https://t.co/JOHUmR3DVx pic.twitter.com/q6x1iDBv6K

NBC Days of Our Lives Spoilers: Enemies Closer Than They Appear

It makes sense that Vivian would be involved. There is speculation that she is working behind-the-scenes. Just because she’s not currently in Salem doesn’t mean she isn’t getting her hands dirty. Plus, Vivian is well-known for not caring about the consequences of her actions. She also isn’t bothered one bit if someone innocent gets caught in the crossfire.

Who do you think drugged Abigail and what was their reason? Does Abigail have more enemies than she realizes? Could this be the work on Vivian Alamain?