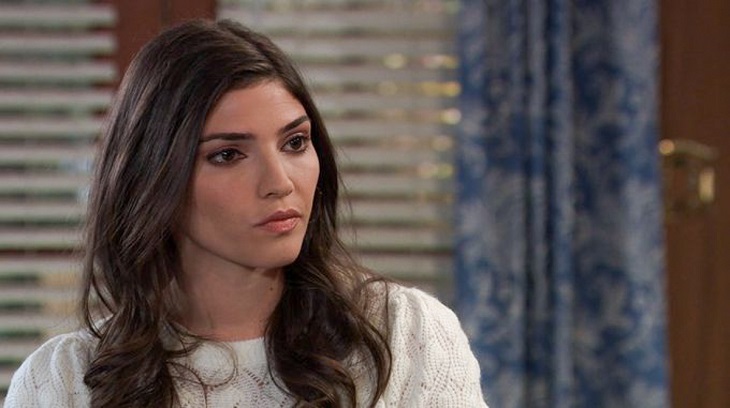 General Hospital (GH) spoilers reveal Brook Lynn Quartermaine (Amanda Setton) just might have designs on Lulu Spencer-Falconeri’s (Emme Rylan) boyfriend, Dustin Phillips (Mark Lawson). GH fans know that Brook Lynn used to have a thing for Dustin at one point when she was a bartender. Some feel that Brook Lynn might want Dustin back simply because he might be “the one that got away.”

GH viewers know that in the beginning, music is what drew Dustin and Brook Lynn together. The two shared a passion for songs and song writing. In fact, Brook Lynn felt that Dustin wrote amazing song lyrics, and that’s why recently fans have seen Brook Lynn make a play to spend more time with the man. Right now, Brook Lynn feels she’s sitting pretty and finally able to move forward with her life in a way that gives her the respect and independence she feels she deserves.

Fans know that Brook Lynn made a horrible decision to sign a five-year contract with music producer, Linc Brown (Dan Buran), who then used the contract like a collar around her neck. To get out of the deal, Brook Lynn essentially made a deal with the devil. The details of that deal still haven’t been made known to the rest of the Quartermaine clan, but when they are Brook Lynn might find herself truly on the outs with her family.

In any case, now that Brook Lynn is free of her contract with Linc, she’s ready to start work on a new album and to do that, she needs an amazing song-list. Dustin’s her ticket to ride.

While it might be true that Brook Lynn is attracted to Dustin, it’s worth remembering that she broke up with him for a reason. What that reason is, GH fans aren’t quite sure of yet, but Brook Lynn didn’t do it because she felt he was a bore. It’s more likely that she felt she wasn’t good enough for Dustin. Many GH fans have pointed out that Brook Lynn seems to have a lot of issues with self-esteem. Brook Lynn may or may not actually want Dustin back.

Some GH fans are now arguing that if Brook Lynn makes a play for Dustin at all, it really won’t have anything to do with love for the man. Instead, it would be an attempt by Brook Lynn to stick it to Lulu whom she truly despises.

The truth is that Brook Lynn will behave herself if her career is foremost on her mind. If launching herself into success and stardom is Brook Lynn’s goal then she’s going to need as many friends and allies as she can get. No one becomes successful entirely by themselves, and Dustin is a man who could be her lyrical meal ticket.

Brook Lynn will need to ask herself if she’s willing to risk losing Dustin because she couldn’t control herself. What if Brook Lynn made a play for Dustin and it backfired? What if Dustin is perfectly happy with Lulu?

No, while Brook Lynn might purse her lips and throw smoky glances Dustin’s way, it’s not likely she’ll act on her desires.