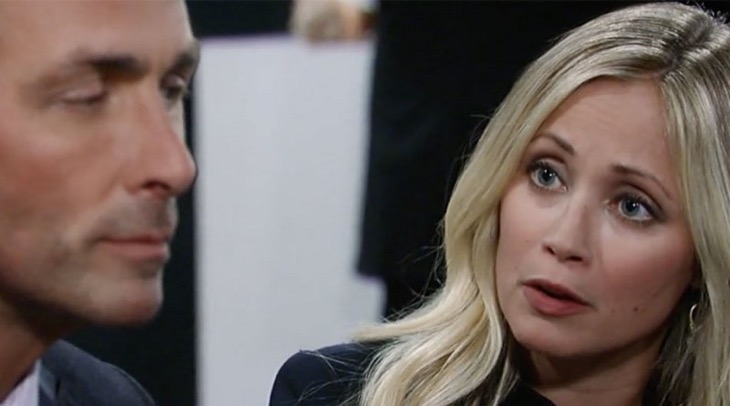 General Hospital (GH) spoilers suggest that some fans believe there could be an open door for romance to blossom between the formerly bitter enemies, Lulu Spencer-Falconeri (Emme Rylan) and Valentin Cassadine (James Patrick Stuart). Of course, others believe there is no way in the world this could possibly happen. Could the truth lie somewhere in the middle?

GH viewers who have been keeping up with things for pretty much forever (at least since 2017) know that Lulu and Valentin have never been friends. In fact, they’ve been much closer to bitter enemies. That was particularly the case after Valentin shot and almost killed Lulu’s brother, Nikolas Cassadine (Marcus Coloma). While Lulu apparently doesn’t have much respect or love for her brother, she still couldn’t bear to see him almost killed. Knowing that Valentin was the one behind the trigger caused Lulu to despise the man.

However, it wasn’t only the fact that Valentin almost killed Nikolas. Valentin also is a man whose entire life has been fueled by resentment (his own words). Because of that, Valentin has done a lot of one-upmanships and this has manifested itself in how he spoils his daughter, Charlotte Cassadine (Scarlett Fernandez). While Lulu is the regular boring parent, Valentin is the rock star prince. Charlotte adores Valentin, while she tolerates Lulu.

Obviously, there’s a lot of room there for resentment toward Valentin on Lulu’s part. On the flip side, Valentin has had his reasons for despising Lulu as well and has taken every opportunity to spite her that’s afforded.

GH fans know that recently all the animosity between Lulu and Valentin seemed to melt away. After Valentin discovered to his horror that Charlotte had seen him commit attempted murder against Ava Cassadine (Maura West), he decided she needed a better role model.

Viewers watched as Valentin tried to be noble and self-sacrificing. He was going to allow Lulu to take full custody of Charlotte. However, when Charlotte and Nina Reeves (Cynthia Watros) found out about his plan, they both flipped out. Charlotte ran away from Lulu in order to confront her papa (honestly, who in America calls his or her father, “Papa?”) and Nina flat out told Valentin that he was giving up on Charlotte and abandoning her.

After Nina’s tough love speech to Valentin, he apparently had a massive and sudden change of heart. He met with Lulu behind closed doors for who knows how long (not long) and when the two emerged … peace reigned throughout the land.

Well, there seemed to be an agreement between Lulu and Valentin to try for a mutually beneficial co-parenting arrangement, anyway.

The truth is, the fans who have talked about some kind of romance between Lulu and Valentin will likely be disappointed.

That’s because Valentin has consistently expressed his desire for Nina. Valentin doesn’t seem capable of truly loving very many people. To date, the only people Valentin has ever said he’s loved have been Charlotte and Nina. That’s it!

Besides all that, while it is quite possible that Valentin and Lulu will draw closer together and may even form a friendship, it’s also likely going to happen as the two overcome obstacles and challenges to their new agreement. Nothing is ever perfect and Lulu and Valentin may find themselves at odds one, two, maybe a thousand times or more before Charlotte is an adult.

The vast majority of GH fans then will likely agree that when it comes to Lulu and Valentin, it’ll be friends yes, lovers no.