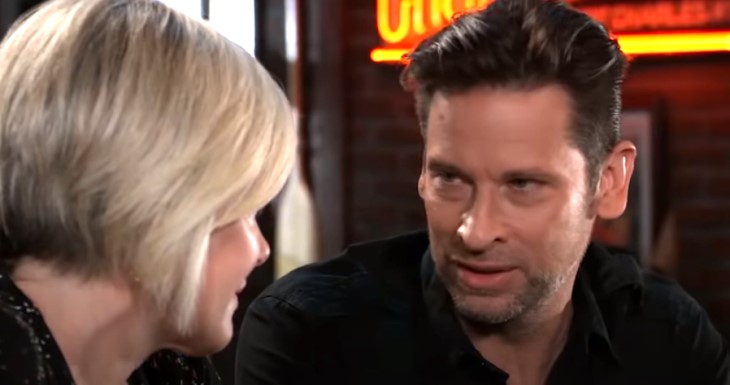 Nikolas will receive a letter from his son Spencer with an ultimatum; he will allow his father back into his life, but only if he divorces Ava, and if he does that, then Ava gets everything according to their postnup that he had previously agreed to and signed. Nikolas really wants both his son and his inheritance but isn’t sure how to get around the postnup to get Ava out of the picture so Spencer will return.

The two will get in a bitter argument over it, and quite likely during the portrait party that Ava throws at Wyndemere Castle to unveil the portrait of her that she had commissioned her old friend and former lover Franco to paint. Of course, as the new mistress of Wyndemere Castle, she wants a portrait of herself hung in place of the one of Helena Cassadine (Constance Towers) that had formerly hung in the castle when Nikolas and Spencer lived there before.

However, even if the argument takes place before the party guests arrive when Nikolas tells Ava if he had to choose between her and Spencer, he’ll take Spencer! Ava acts tough and acts like she has no bonding to or feelings for Nikolas, but who was that who was drawn to “Patient Six” in the Boronsky Clinic in Russia, and couldn’t stay away from him because she thought he might be Nikolas?

It turned out to be the real Jason Morgan, (Steve Burton) as GH viewers will remember. Nikolas undoubtedly upset her and turned her off for a period of time when he gaslighted her about her late daughter Kiki Jerome (Hayley Erin) saying he was a ghost from hell to a drugged Ava, and that Kiki was there with him, but for her to hope that she had found Nikolas alive in the Boronsky Clinic after he’d been dead for over a year at that time speaks volumes!

Ava and Franco go back many years, from when she was a beginning art gallery owner and he was an artist, and the two had dated in New York City. They were involved at the same time as she was involved with Silas Clay (Michael Easton) who was Kiki’s birth father – and for many years Ava led Franco to believe Kiki was his daughter, and they always had a father-daughter type of relationship until the day she died.

Elizabeth Baldwin (Rebecca Herbst) will be there too and she will be protective over Franco, but he will comfort Ava when she has a meltdown and says Nikolas told her he’d take Spencer and no money over her any day, in anger, but then Elizabeth hasn’t known Ava as well or as long as Franco – and he will try to comfort her when she finds herself more hurt than she would have expected herself to be by Nikolas’ strong words!

Stay tuned to GH, and keep checking General Hospital spoilers frequently for all the latest news, updates and developments1