Days of Our Lives Spoilers: Eli Arrests Lani For Helping Kristen Escape? Or Will He Cover For Lover? 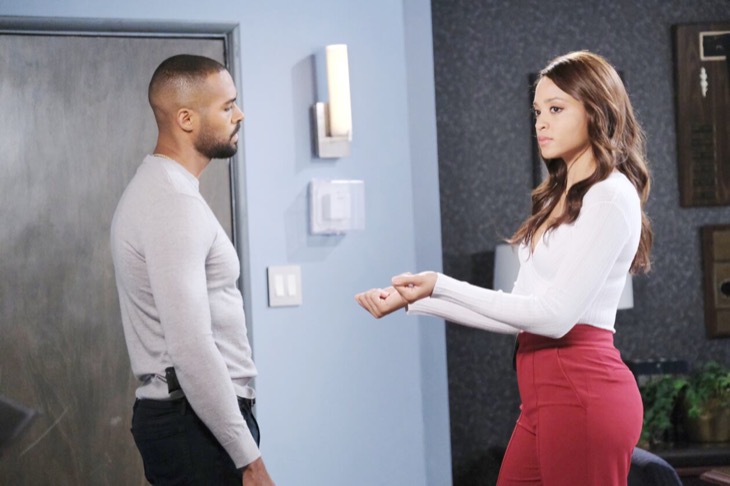 Days of Our Lives spoilers reveal that Eli Grant (Lamon Archey) now realizes that Kristen DiMera (Stacy Haiduk) tried to kill Victor Kiriakis (John Aniston). He must arrest her, but when Lani Price (Sal Stowers) finds out, she helps Kristen escape. Eli is forced to make a decision. Does he arrest the woman he loves or try to protect her from facing the consequences?

DOOL spoilers reveal that on Friday’s episode, Eli finally got a chance to talk to Victor. The patriarch was able to say that Brady Black (Eric Martsolf) didn’t stab him, but it was Kristen. Eli repeated what he just heard to confirm that Kristen was the stabber. Victor once again made it clear that Brady is innocent and the real attempted murderer was in fact, Kristen.

Days of Our Lives Spoilers: Is A Wedding In The Works For Eric And Nicole?

In the latest issue of Soap Opera Digest, it is implied that Eli has no choice but to get to Brady’s arraignment to reveal the truth. Brady’s future and freedom count on the truth coming out. However, this also means that the real attacker will have to be placed under arrest. Kristen knows that it is going to happen since Lani informed her that Victor woke up.

Days of Our Lives spoilers reveal that Lani has to make a decision. Head writer Ron Carlivati told the magazine that Lani and Kristen’s friendship could have her make a shocking decision. She ends up helping Kristen escape after she is arrested and soon, Eli will be furious to find out the details.

Days Of Our Lives Spoilers: Steve And Hope Grow Closer, Kayla Odd Woman Out And Stuck With Justin https://t.co/qXrCU21nK0 pic.twitter.com/1hVIbgjzKf

Days of Our Lives Spoilers: Dating Dilemma and Criminal Charges?

Once Lani tells Eli the truth about her part in helping Kristen escape, the detective will be enraged. Lani took an oath to uphold the law. Just because she is friends with Kristen isn’t a good enough excuse for helping a prisoner escape.

Now the ball is in Eli’s court. What does he do after finding out the truth about Kristen’s escape? Does he arrest the woman he loves for her role in the escape? Or does he try to protect Lani and cover up what she has done, which puts his own career at risk?

It won’t be an easy decision and no matter what Eli chooses to do, there will be consequences. To find out what happens next, fans will have to keep watching the NBC soap opera.