The Bold and the Beautiful Spoilers: Time Jump In Los Angeles on B&B? 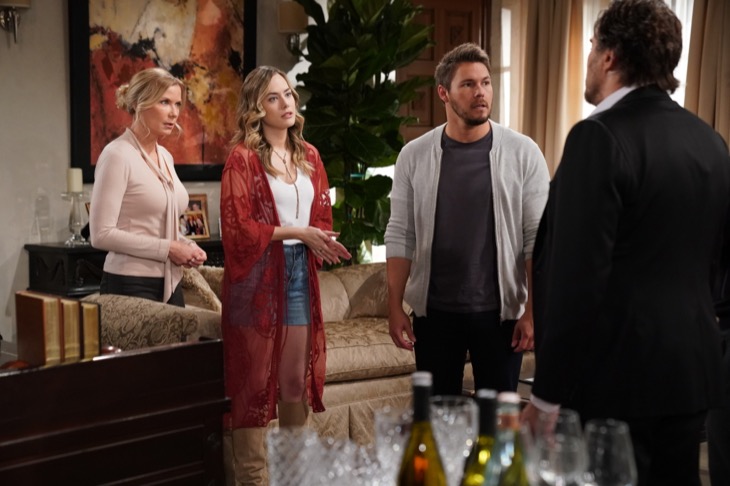 The production shutdown impacted ‘The Bold and the Beautiful’ in mid-March. The last new episodes were shown in April, which meant that a plan to fill the lack of new programming had to be quickly developed.

Repeat episodes are allowing devoted fans to relive dramatic storylines, while also enabling newer viewers to familiarize themselves with the show’s history. No new episodes are currently allowed to be produced at the studio, which forces B&B to be on the air indefinitely without traditional new content. That is clearly a very steep challenge.

The unknown lag time until the next new episodes can be recorded means that prepared scripts, or ones that are being written, will simply pick up all storylines where they left off in April, or some form of time jump will be created.

A two-part special, ‘Becoming Bold and Beautiful’, which had never been shown in B&B’s daytime slot, focused on a Monte Carlo location shoot that took place earlier this decade. Those behind the scenes shows were followed by the episodes that were created as part of a theme week.

Other theme weeks, that focus on certain characters or particular storylines are set to follow. Many familiar faces will be seen during these repeat episodes, which will help to fill the need for programming.

Bold And The Beautiful Spoilers – Jumping Ahead In Los Angeles

The actors will look slightly different, as all human beings will, assuming that B&B isn’t able to return to production for a number of months. That alone would create a visible change from where the last scenes finished. But considering that a genre is a form of escapist entertainment, it’s not likely that any devoted fan would have a legitimate beef about visual continuity.

However, the first new script could allow a time jump to whenever the present day will be. Doing so could allow the characters to actually mention the virus effects, or for its impact to be worked into existing storylines. However, that choice is risky, as fans tune in to see something other than reality in this serialized format.

The Bold And The Beautiful Spoilers: What Happened To Ronn Moss (Ridge Forrester)? What You Need To Know! #bb #boldandbeautiful #RonnMoss https://t.co/74sr1ZkZwc

Bold And The Beautiful Spoilers – What A Skip Could Bring

Assuming a time jump of a number of months happens. Well, then something will have happened with Flo Fulton (Katrina Bowden). Wyatt Spencer (Darin Brooks) would have either caught Sally Spectra (Courtney Hope) and Doctor Penny Escobar (Monica Ruiz) trying to move Flo out of his living room, or they would have already done so months ago. Either scenario probably would have created different outcomes.

Brooke Logan (Katherine Kelly Lang) managed to retrieve Ridge Forrester (Thorsten Kaye) from Las Vegas, Nevada. But did she win him back in the meantime, or did Ridge finalize the ‘Bridge’ divorce and move on with Shauna Fulton (Denise Richards)? That’s just another of many questions that would be answered by fast-forwarding this version of LA if a time jump happens on B&B.