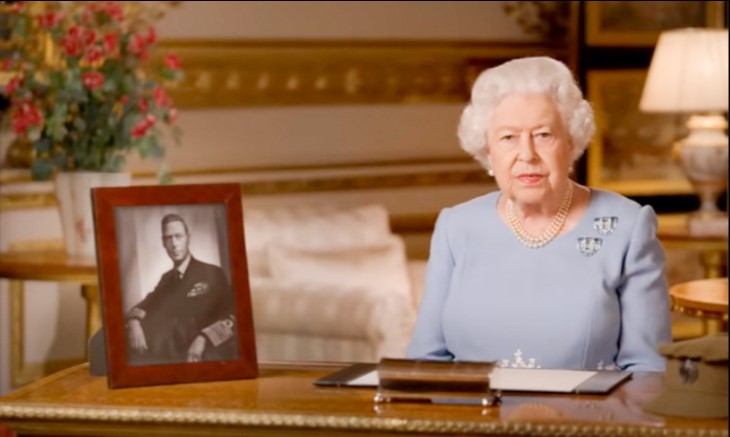 With these words, Queen Elizabeth began her speech on Friday marking the 75th Anniversary of VE Day: “I speak to you today at the same hour as my father did, exactly 75 years ago. His message then was a salute to the men and women at home and abroad who had sacrificed so much in pursuit of what he rightly called a ‘great deliverance.’”

She chose to address the UK at 9 p.m., the same hour in 1945 that her father King George VI told the nation that WWII had ended.

75 Years Ago King George VI Made A Historic Address

After his address Britons went out into the open air to celebrate the end of World War II. This year the response was muted due to the coronavirus pandemic that is permeating the world like an enduring fog, dampening the spirits of millions.

Nonetheless, the queen carried on, telling the nation it is one that, “those brave soldiers, sailors, and airmen would recognize and admire.”

The Queen’s Speech Was Momentous And Historic

The speech, addressing the incredible milestone anniversary of VE Day, was recorded in the White Drawing Room at Windsor Castle and played on the BBC.

The historic occasion was suitably framed by appropriate visuals which included a photo of King George VI in his Admiral of the Fleet uniform with RAF Wings displayed on the table beside the Queen.

On her other side was the cap she wore when she was a part of the Auxiliary Territorial Services during the Second World War. Her tenure makes the queen the only female member of the royal family to have joined the Armed Forces on a full-time, active basis.

A photo of the royal family with Winston Churchill at Buckingham Palace on VE Day was also on display.

During Her Address, The Queen Reminisced On Her Recollections Of That Fateful Day 75 Years Ago

Speaking of her own memories of VE Day, Her Majesty said, “I vividly remember the jubilant scenes my sister and I witnessed with our parents and Winston Churchill from the balcony of Buckingham Palace. The sense of joy in the crowds who gathered outside and across the country was profound, though while we celebrated the victory in Europe, we knew there would be the further sacrifice.”

Her Majesty Had To Endure Life-Changing Event With Solemnity https://t.co/AOt757qWPl pic.twitter.com/qbRPyqlmNi

The Queen’s speech came at the end of a day full of commemorations across the UK, including Prince Charles and Camilla leading a period of silence at 11 a.m. from their home in Scotland.