The Young and The Restless Spoilers: Mariah And Tessa Talk About Their Future And Consider Marriage 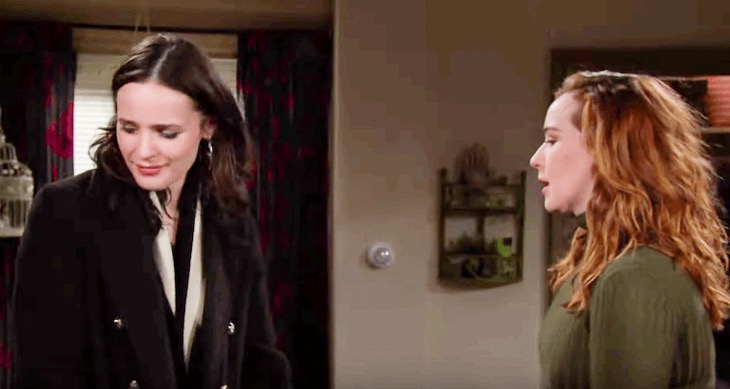 Mariah and Tessa have been together since shortly after Hilary Hamilton (Mishael Morgan) died in July 2018. Both had been married to men in the past and it had never worked out, and they found themselves becoming entangled romantically with one another, and even though they had a rocky start, they became very close over a relatively short period of time and had moved in together in 2018.

The Young and the Restless Spoilers: Theo’s Insecurities Keeping Him From A Real Relationship – Risks His Future With Lola

The experience of helping Mariah’s mother, Sharon Newman (Sharon Case) deal with life having breast cancer combined with two significant deaths in Mariah’s life in the past two years, namely Hilary, who she had become close to working with as co-host of the Genoa City television show “GC Buzz” and then becoming head of Power Communications after Neil Winters (Kristoff St. John) died suddenly has made Mariah not take life so much for granted – and that includes relationships and love.

The two just recently weathered a rough patch when Mariah had misunderstandings of Tessa’s current relationship with her ex-husband, Tanner Watts (Chase Coleman) whom she had gone on tour with and Mariah had a one night stand with a bartender, but the two found their way back together and reconciled, with a lot of help from Tanner himself! Tessa, too has been deeply affected by Sharon’s situation, and the fact that even though there has been nothing said that Sharon may not recover from her condition, one just never knows, and life can be so fleeting. Even their breakup shows her that – they had never thought that anything could break them up and yet it did for a short period of time.

Y&R Updates – Can They Get Married Legally?

In the real world, Wisconsin, where Genoa City is said to be located, has not legalized same-sex marriage and has a statute that says couples can be fined up to $10,000 and face prison for going out of state and getting married and then returning to Wisconsin, but this is not the real world – this is soapland! If Mariah and Tessa decide they want to get married, we will say in soapland that they can get married legally and it would be recognized. But if the script were to be written according to the real world, they may have to move to a different state and stay there!

Either way, with the realization that life is short and not everyone gets their happily ever after, Mariah and Tessa may decide that a more permanent solution with vows to one another, whether it be a marriage with a license or just making promises to each other in front of family and friends is what they want to do. They will want to voice their commitment to each other in front of witnesses and express their desire to be joined in a permanent union and even if it’s a simple ceremony with family and friends present either in Sharon’s house or maybe even at Crimson Lights it should be a sweet reminder that love knows no boundaries!