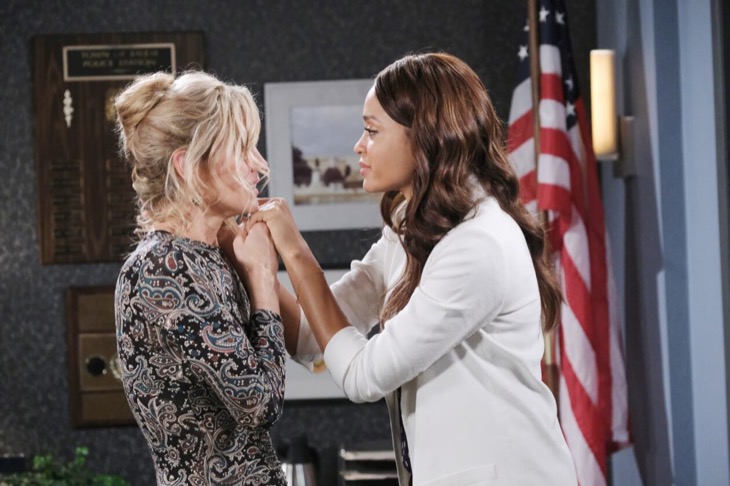 NBC Days of Our Lives updates spoilers reveal that Kristen DiMera (Stacy Haiduk) fled with her baby. However, it wouldn’t have been possible without the help of Lani Price (Sal Stowers). Haiduk discussed the unlikely friendship, Lani providing true friendship, and how it helped create balance in Kristen’s world.

DOOL spoilers previously teased that Kristen and Lani left Salem during the time jump. Fans were surprised that both women ended up in an Italian convent. What was even more shocking was that Lani and Kristen formed a friendship. They bonded over losing the men they loved and both dealing with the death of their babies.

Kristen has had a few friendships in Salem over the years. But none ever lasted and they were never quite as solid as her friendship with Lani. The two seem to have a concrete bond. Even though they didn’t share many scenes together lately, Lani did take a big risk and proved her loyalty to Kristen.

What is most interesting about this friendship is they are polar opposites. Kristen is a career criminal while Lani is a law-abiding police detective. Kristen is on an eternal emotional rollercoaster while Lani is grounded. Kristen acts without thinking first, but Lani usually considers the consequences before taking the plunge.

Days of Our Lives spoilers tease that Lani decides to confess the truth about helping Kristen escape. She has already put Eli Grant (Lamon Archey) in a difficult position just by him knowing her involvement. Now that Kristen has her baby and is free, Lani feels it’s time to tell Police Commissioner Rafe Hernandez (Galen Gering) what she did and face the consequences.

Days of Our Lives Spoilers: Lani Arrests Gabi, But Not For Drugging Abigail – Details Here!

Days of Our Lives Spoilers: Balancing an Unstable Woman

Speaking to Soaps.com, Haiduk explained that Lani was a good influence in Kristen’s unstable world. Lani also proved that she was loyal and a true friend with no hidden motives. These are qualities that Kristen has never experienced in a friend before. The actress said that Lani provided some balance to Kristen’s orbit. It is clear that Lani’s friendship was instrumental in showing that Kristen wasn’t all bad, just damaged.

Haiduk absolutely loved Kristen’s storyline because it showed viewers that she wasn’t just a soap villain. She was a human being with many complicated layers. It made Kristen more relatable to fans, that’s for sure.