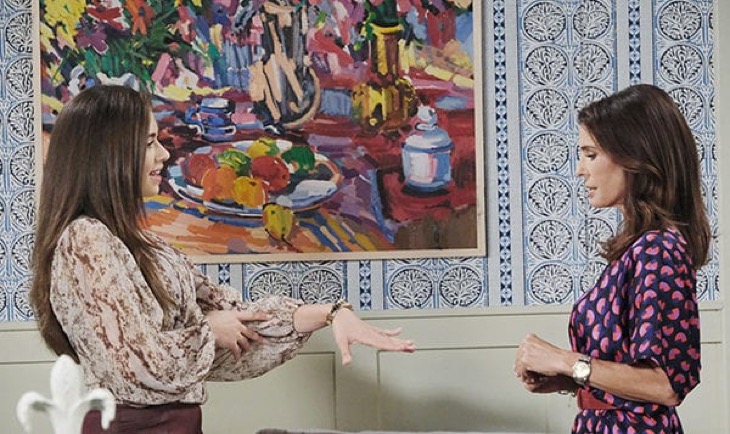 NBC Days of Our Lives updates and spoilers reveal that Hope Brady (Kristian Alfonso) wasn’t thrilled about the “Cin” engagement. However, she eventually gave her blessing, but don’t expect it to stay that way. Jake Lambert (Brandon Barash) unintentionally put Ben Weston (Robert Scott Wilson) in danger. This could make Hope fear that Ciara Brady (Victoria Konefal) could be at risk.

DOOL spoilers reveal that when Ciara announced her engagement, Hope didn’t seem too happy. After some time thinking about it, Hope finally gave Ciara her blessing. However, she truly doesn’t seem thrilled about the wedding, even though she is helping Ciara with the planning.

While Ciara is busy with wedding planning, there is still the mystery of Jake. He has a dark past and is hiding a dangerous secret from everyone. He continues to act clueless when confronted, even after thugs came to the garage.

Days of Our Lives spoilers reveal that there is still no answer to what the thugs wanted from Jake. What we do know is that they were sent there by a mystery man. They were delivering a message to Jake. However, they mistakenly beat up Ben thinking he was the mechanic.

Days of Our Lives Updates: Ciara Brady At Risk?

In the latest issue of Soap Opera Digest, Konefal explained how important Hope’s blessing is to Ciara. The actress also stated that Ciara thinks life is perfect right now and teased which means something is about to go horribly wrong.

Could the thugs target Ciara thinking that she is Jake’s love interest? They might think Ciara is the key to getting Jake to comply.

After Hope hears about Ben’s attack and his association with the mechanic, Hope could take back her blessing. She is looking for a reason to forbid Ciara to marry Ben. Jake putting Ben in danger, which could end up risking Ciara’s life might be just the excuse Hope needs. However, Ciara’s disappointment won’t stop her from marrying Ben. She is determined, stubborn, and can be defiant. She truly loves Ben and won’t let anything or anyone… including her own mother… stand in the way.

Do you think Hope will take back her blessing after learning about Jake and Ben’s attack? Could she fear the mechanic might put Ciara at risk? How will the young woman react to the news?