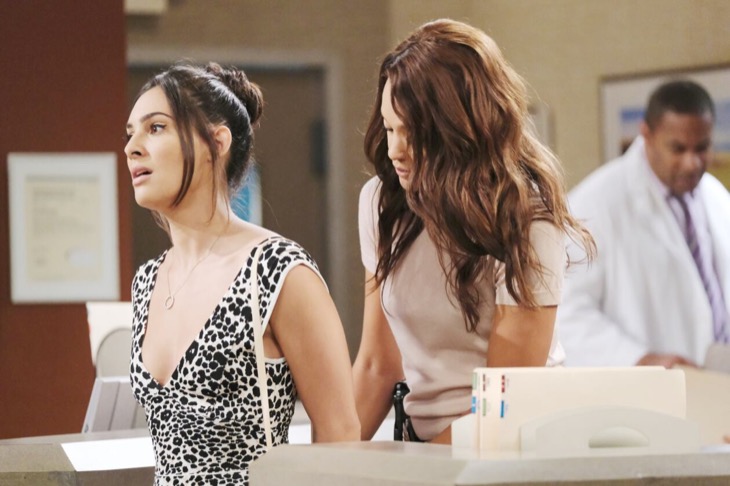 Days of Our Lives spoilers reveal that the week of May 18 will be full of action, surprises, revelations, and fury. There’s also a little romance thrown in for good measure. The preview clip shows that Dr. Wilhelm Rolf (William Utay) set up Gabi Hernandez DiMera (Camila Banus). She is furious and could plan revenge. However, that doesn’t mean she gives up her new obsession.

DOOL spoilers reveal that ever since Gabi saw Jake Lambert (Brandon Barash), she has been convinced he’s her dead husband. She comes up with a few theories, one of which is Jake is pretending to not know Gabi to protect her. The other theory is that the mechanic doesn’t know he is Stefan DiMera.

Gabi decides to talk to Dr. Rolf to get answers. She’s convinced that the mad scientist is somehow involved. He denied it at first and reminded Gabi that Stefan was brain-dead and had his heart removed.

However, after Gabi’s persistence got on Dr. Rolf’s nerves, he finally had enough. Dr. Rolf told Gabi that Jake was Stefan and he doesn’t remember being Stefan. He convinced her to get his serum and inject Jake with it.

Days of Our Lives spoilers reveal that Gabi was willing to do anything to get back Stefan. So, she grabbed the serum and tried injecting Jake with it. However, Ben Weston (Robert Scott Wilson) intercepted the serum assault.

During the week of May 18, Gabi will be arrested by Lani Price (Sal Stowers) for assaulting Jake. It isn’t known if it is related to her injection attack or not. Perhaps she clobbers the poor guy or Jake might just be trying to get rid of the widow.

Days of Our Lives Spoilers: Not Giving Up

In a preview clip posted by the official Days of Our Lives YouTube channel, Gabi lashes out at Dr. Rolf. She screams that he set her up and demands answers. He calmly replies that he never liked her. Knowing Gabi, she will be determined to get revenge for being scammed. However, she might be out of her league if she battles Dr. Rolf.

Playing Along, But For How Long?

However, will Jake use Gabi and play along in order to escape his troubles? He’s in hot water and thugs are being sent to his job. For someone annoyed with being mistaken for Stefan, he sure is trying to learn an awful lot about the dead Salemite. We will have to see how this storyline plays out in the next few weeks.