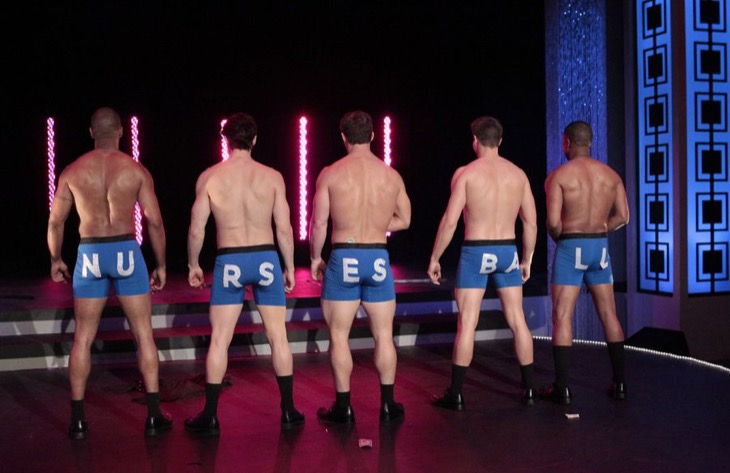 ABC General Hospital spoilers and updates tease that while there won’t be a new Nurses’ Ball 2020 to attend this year, the majestic event will not be absent from television screens. That’s because GH will air three glorious weeks of encore episodes beginning Monday, May 25, and ending Friday, June 12. That’s one heck of a consolation prize, fans!

The classic event debuted in 1994 and is dedicated to raising HIV/AIDS awareness and generating research funds.

Every year is better than the last, and that’s saying a lot when red carpet fashion mingles with musical and dance extravaganzas, Lucy Coe changes gowns a zillion times and of course, unexpected mayhem reigns supreme.

Is your favorite moment included in the flashback binge? If Magic Milo (Drew Cheetwood) and his fellow strippers is high on your list you’re in luck!

We’ve got everything you need to know, just bring the popcorn and tissues.

On Tuesday, May 26 Luke Spencer (Anthony Geary) and Tracy Quartermaine (Jane Elliot) are featured and musical performances include Kiki Jerome (Hayley Erin) and Friends singing “Raise Your Glass” by Pink. Also included is a performance by Eddie Maine (Wally Kurth) “You Took the Words Right Out of my Mouth” by Meat Loaf.

The one to watch however is the epic striptease to AC/DC’s “You Shook Me All Night Long” by Magic Milo & the Magic Wands. The original air date was May 9, 2014.

General Hospital spoilers – Do you have a favorite Nurses Ball episode?

Wednesday, May 27 brings The Britch (Kelly Thiebaud) telling Nikolas Cassadine (then Tyler Christopher) she loves him. Performances include Brad Cooper (Parry Shen) doing “Brokenhearted” by Karmin, and a cadre of Port Charles ladies performing “I Love It” by Icona Pop. The original air date was May 12, 2014.

On Thursday, May 28 you don’t want to miss Brad proposing to Lucas Jones (Ryan Carnes). You’ll see “Welcome to the Nurses Ball” by Epiphany Johnson, Elizabeth Webber, Sabrina Santiago, and Felix Dubois, plus Obrecht does “99 Red Balloons” by Nena. Original airdate: May 1, 2015.

Friday, May 29 the Ball goes dark as Duke Lavery (Ian Buchanan) makes a killer move on Jordan (Ashford (then Vinessa Antoine). Eddie Maine does “Crazy Little Thing Called Love” by Queen, and Damien Spinelli (Bradford Anderson) performs “It Might Be You” by Stephen Bishop. Original airdate: May 5, 2015.