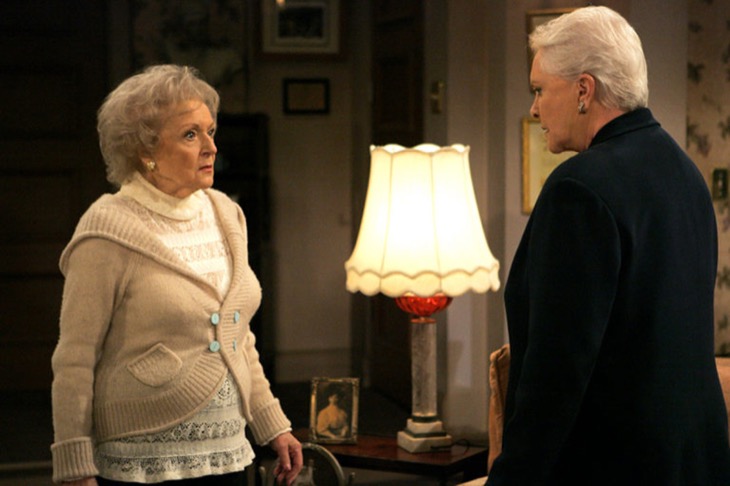 CBS The Bold and the Beautiful spoilers and updates reveal that buckets of drama will fall in L.A. next week as the show continues to play encore episodes. Next week’s theme will be Celebrities Week and includes a guest appearance from a host of big-name stars including Betty White, Bob Barker, and Usher.

On Wednesday May 27 Betty White appears as Ann Douglas, Stephanie Forrester’s (Susan Flannery) mom. Their reunion is not a happy one as there is much past tension between the two ladies. In all, White appeared on 23 episodes before her character’s death.

Let’s find out what their feud is all about!

At one point Stephanie was angry with Ann when she admitted she wanted to stay in the Forrester guest house as a part of the family.

Stephanie does not want this and wants to send her back to Chicago, but her husband Eric Forrester (John McCook) refused.

Pam Douglas (Alley Mills) is Stephanie’s sister and Ann’s daughter. Unfortunately, Stephanie was abused by her father, and Pam and her mother never said anything about it.

Sometime earlier Stephanie and Eric flew to Chicago to confront her about the abuse. Ann denied it saying Stephanie was exaggerating her dad’s discipline. Later Pam and Ann came to L.A. for Christmas and Ann then admitted she knew about the abuse; she didn’t say anything in the past because she was afraid of her husband.

Later, Stephanie was shot, and Ann said Pam may have been the shooter, indicating she was on medication for bipolar disorder. Pam was not the shooter but she was getting into trouble by interfering in Eric and Donna Logan’s (Jennifer Gareis) affair.

Pam was angry that the two were dallying around at her sister’s expense and set out to right the wrong.
She did this by playing dirty tricks on the blonde girl, such as turning her hair and teeth green just before she was to marry Eric. She also poured honey on her, tied her to a chair, and let a grizzly bear into the room.

She also trapped Donna in a big truck. When Pam straightened out her medications, she did not recall doing those things to Donna.

At a later date Ann came back to L.A. and called her daughters and told them she had pancreatic cancer. She refused to go to the hospital but stayed with Taylor Hayes (Hunter Tylo). Stephanie and Taylor were taking care of Ann when she had an episode. Ann begged them not to let her die in the hospital. Instead they went to Paradise Cove where she peacefully died.