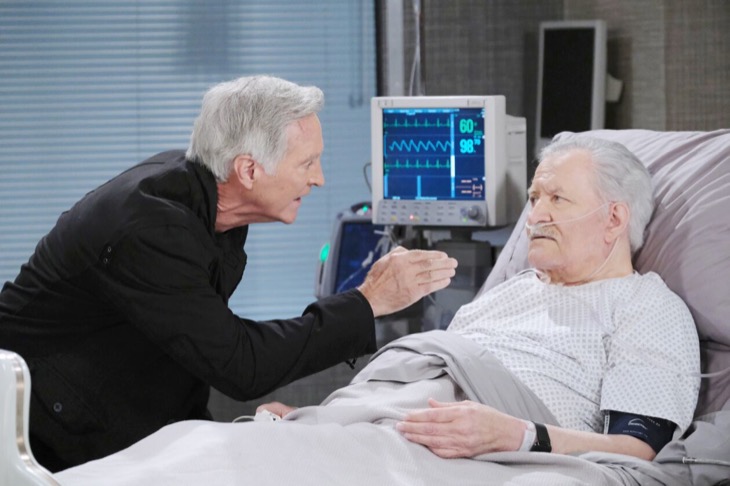 NBC Days of Our Lives spoilers and updates reveal that Brady Black (Eric Martsolf) is out for revenge. He plans on taking down Titan in order to make Victor Kiriakis (John Aniston) pay. However, John Black (Drake Hogestyn) becomes suspicious of Brady’s motives. Can he reel in Brady before Victor finds out and strikes back?

DOOL spoilers reveal that Victor tries to make things right with Brady. The only thing he can really offer him (besides a heartfelt apology) is a job. He fires Xander Cook Kiriakis (Paul Telfer) and gives the position back to Brady. However, Victor may soon regret that decision because there is no way that Brady is even close to forgiving his grandfather.

It is teased that Brady will go to the dark side and try to get revenge on Victor. He goes ahead and accepts the Titan CEO position, but he will perform his job a bit differently than Victor thinks. He plans on working from the inside out to destroy the company. However, we have reason to suspect that Brady’s payback plot will involve more than just a ruined business.

Days of Our Lives spoilers reveal that during the week of June 1, John will question Brady’s motives. John loves his son and understands he is going through a lot of heartache right now. But he also knows that messing around with Victor isn’t the wisest move. Can he pull Brady back in before Victor finds out and gets revenge of his own?

Days of Our Lives Spoilers: Lucas, Will, and Rafe Pulled Into Allie Horton’s Story https://t.co/spjOtO0iJH pic.twitter.com/Cg9DNVIfLp

Days of Our Lives Spoilers: Plan Doomed To Go Wrong?

Even though Brady thinks he is justified in his behavior, two wrongs don’t make a right. He also needs to consider who else will be impacted by the revenge plot. What would Maggie Horton Kiriakis (Suzanne Rogers) say about this? Could Victor end up striking back when he finds out? How would he explain to future employers that he intentionally destroyed the company that he worked as CEO?

It’s not just the Kiriakis fortune that will be affected, but Brady’s inheritance as well. There might even be a lawsuit if he’s not careful. If Titan gets destroyed, it’s not just Victor that will pay — but every single employee of the company and most of them are not involved in this. We will have to keep watching the NBC soap opera to find out if John can stop Brady or if it’s already too late.