Days of Our Lives Spoilers: Justin Needs A Sign – Asks Dead Wife For Blessing – But He Has Competition! 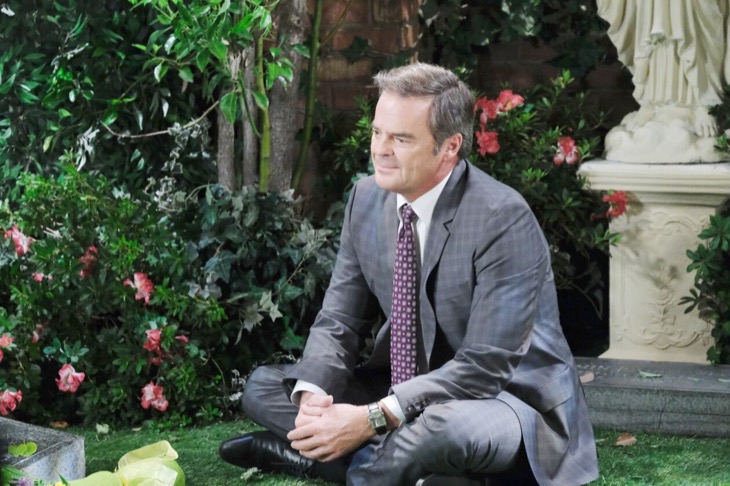 Days of Our Lives spoilers reveal that Justin Kiriakis (Wally Kurth) goes to Adrienne Kiriakis’ (Judi Evans) grave following the explosive face-off with Orpheus (George DelHoyo). He asks the dead woman for her blessing as he plans on proposing to Kayla Brady (Mary Beth Evans). The actor also explains that Justin is searching for a sign that this is the right thing to do.

DOOL spoilers previously teased there would be an emotional explosion. However, viewers didn’t realize it would be Justin. Normally calm, cool, collected, and reasonable, we saw a very different version of the character on Tuesday’s episode.

Now that it is out of his system, what is next for Justin?

In the latest issue of Soap Opera Digest, Kurth explained that Justin knows the truth now about Adrienne’s death. He wants to move on with his life, which means proposing to Kayla. However, he wants to make sure that Adrienne would be okay with that. Despite her being deceased, he still goes to her gravesite and asks for her blessing.

Days of Our Lives spoilers reveal that Justin doesn’t just go to Adrienne’s grave to ask for her blessing. He is also looking for a sign that marrying Kayla is the right thing to do. He must get some reassurance, if not from his dead wife, then from someone else. It is teased that Justin and Sonny Kiriakis (Freddie Smith) have a heartfelt chat at the gravesite.

Days of Our Lives Spoilers: Proposing To Kayla Brady

In the days ahead, expect Steve “Patch” Johnson (Stephen Nichols) to decide that he’s not going to let Kayla go after all. He races to tell Kayla that he still loves her, but stops in his tracks. What forces him to press the pause button? Justin down on one knee proposing to Kayla.

Now, will Steve back off or could he end up telling Kayla how he really feels? If and when that happens, which man will Kayla choose? It seems that this love triangle is far from over.

Days of Our Lives Spoilers: Who Dies In July? 4 Weddings And A Funeral https://t.co/0hJd3ZJcIs pic.twitter.com/oU60IxNtF0

Who do you think Kayla is better off within the end? Should she stick with Justin, who is known for his stability? Or is she better off with passionate, but rollercoaster Steve? We will have to keep watching the NBC soap opera to see which man she eventually chooses.