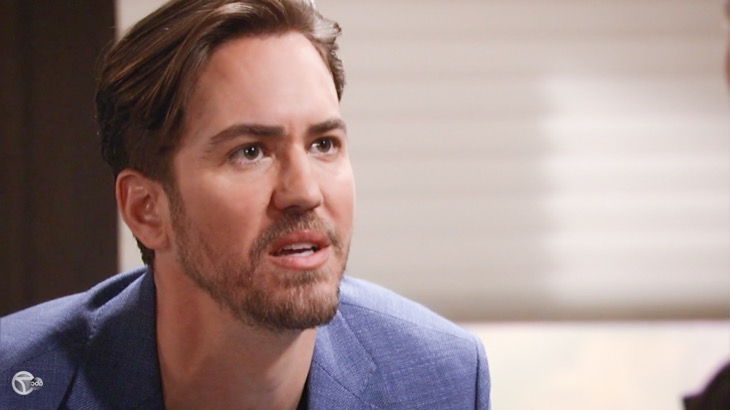 General Hospital (GH) spoilers suggest that Peter August (Wes Ramsey) may be looking for an opportunity to redeem himself in the eyes of the entire Port Charles community. GH fans know that although Peter was behind a plot to use Holly Sutton (Emma Samms) as a distraction for her former husband, Robert Scorpio (Tristan Rogers), he didn’t intend to kill her.

GH fans know that Peter’s recently been playing up quite publicly his love for Maxie Jones (Kirsten Storms). Peter’s been doing his best to establish the narrative that he truly is a changed man, that the evil legacy of Cesar Faison (Anders Hove) no longer touches him. GH viewers have seen him try to make peace with Damian Spinelli (Bradford Anderson), even with Scorpio to a degree, and in each case has portrayed himself as a man who simply wants to have a family and a normal life.

Some GH fans believe Peter. The problem isn’t Peter’s desire or motives. The problem is that all of Peter’s old demons continue to clutch on to him. Peter is a prisoner of his past and it’s clear that he desperately wants out … even if it takes using wicked tactics to sweep his past into the abyss.

Billy Miller Coming Back to General Hospital? Drew Cain Back To Port Charles?

It may be something many GH viewers haven’t really considered, but the entire situation with Holly Sutton could be a boon to Peter’s ultimate goal. Many believe that if things continue the way they are, eventually Peter will be found out as the mastermind behind the framing of Dr. Liesl Obrecht and more. The fact that Holly may be dead is a circumstance that only lends itself to more anger and more resolve on the part of Robert Scorpio. When Scorpio finally sobers up, who do viewers believe will become the object of his ire? Of course, it will be Peter August.

Therefore, if Peter should happen upon any evidence that Holly is still alive before Scorpio (or anyone else) then it will be his one major chance to seize the opportunity to bring her back to Port Charles safe and sound. Not knowing Holly’s actual situation right now, if she is alive … it could be possible that there is another, unknown player involved … perhaps someone like the evil mastermind, Cyrus Renault (Jeff Kober) who wants some leverage on Port Charles’s district attorney. (Remember, Cyrus already is already pulling the strings of Port Charles’s police commissioner.)

If that’s the case, and Peter discovers it … some believe that he may yet sacrifice something of personal worth in order to secure Holly’s release.

The truth is, if Peter were to somehow “save” Holly, he would indeed be hailed by Port Charles’s society as a hero. It could even cause Scorpio to back off his investigations into Peter’s former treachery. Of course, this could also add new problems to Peter’s laundry list. New enemies, perhaps such as Cyrus Renault, could make life dangerous for Peter and his new little family with Maxie.

Still, finding Holly could solve one major problem for Peter, allowing him to perhaps once and for all throw his past into the depths of Port Charles’s bay … allowing its waves to swallow his sins forever. That might be nice, because truth to tell, there are many GH fans that would like to see the tormented Peter August finally free himself from the legacy of Cesar Faison once and for all.