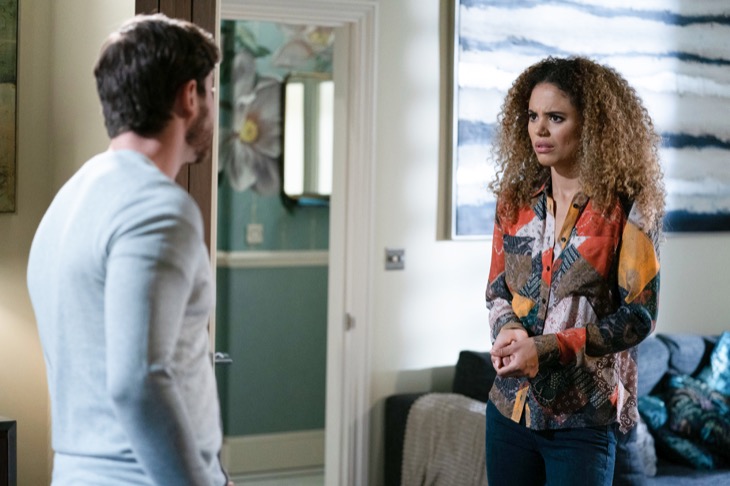 BBC Eastenders spoilers and updates for the week of June 8 reveal that the Atkins’ family will go through what is being described as “horror showdown.” It begins when Gray Atkins (Toby-Alexander Smith) accuses his wife of having an affair. Will she be able to convince him that she’s been faithful? Will he beat her again? If so, will she be able to survive another vicious assault?

Fans have watched in horror as Gray continues to abuse Chantelle. Just recently, he beat her so viciously that she couldn’t even stand up on her own. Fans were worried that she may die from her injuries. Thankfully, she survived, but Gray’s abuse continues to be kept secret.

Next week, Chantelle will borrow the car to pick up some computers for Kheerat Panesar (Jaz Deol). However, Gray isn’t too thrilled about it and decides to find out where she is going and what she’s up to.

Eastenders spoilers from Metro reveal that Gray installs a tracking device on the car without Chantelle’s knowledge. When looking at the data, he finds the car has been in several different locations. Then, the log from the previous week shows the car was taken to Stratford.

Of course, he doesn’t realize that this was due to Ben Mitchell (Max Bowden) taking the car from the garage. So, of course, he thinks the worse and Chantelle will end up paying the price.

Gray ends up coming up with the assumption that Chantelle is having an affair. He accuses her of cheating on him with a mystery man. He also insists that she is lying when Chantelle defends herself. No matter what she says, though, Gray has this idea stuck in his head that she’s having an affair. It will be unlikely that she can convince him otherwise.

EastEnders Spoilers: Keegan Wants To Leave Walford With Karen – Will He Leave Tiff Behind? https://t.co/PXqI1ku3af pic.twitter.com/qZvFXNPc9a

Will She Live Through Another Beating?

Fans are certain that Gray’s rage will end up turning violent. It’s not the first time she has been beaten for something that wasn’t her fault. It probably won’t be the last, either.

The big question is, how badly will Gray hurt his wife this time? Will she survive yet another vicious assault? When will his horrible and frightening behavior be exposed? What will it take before she finally packs up and leaves him for good? We will have to keep watching the soap to see what happens next.