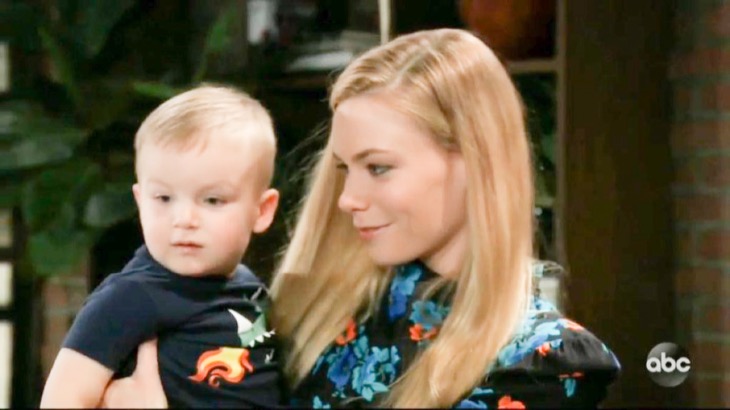 General Hospital (GH) spoilers suggest that Nelle Benson (Chloe Lanier), horrible freak that she is, just might be able to turn her life around. GH fans know that if Nelle becomes a better person, however, it won’t be due to her own efforts. Instead, like Carly Corinthos (Laura Wright) before her, Nelle’s life might be impacted beyond even her own expectations by what it means to actually be a mother to Wiley Cooper-Jones (Erik and Theo Olson)!

Who are some GH fans trying to kid? Do they really believe Nelle Benson is going to suddenly become Snow White if/when a family court judge awards her even shared custody of Wiley? It’s an insane notion to believe even for an instant that Nelle might swing toward the light side of the force because … “Wiley” … to put it bluntly.

Oh sure, Carly changed over time because of the demands motherhood placed upon her. Everyone knows that suddenly, Carly changed because she apparently realized not all in the world entirely revolved around her need to sleep with every man in Port Charles.

Nelle has never been an addict of sensual pleasures that most GH fans can tell. Her tastes tend to run toward power and material things. Nelle has an idea of what her life should be like, and she’ll do anything to get it. Literally, Nelle will do anything. Having Wiley won’t make Nelle believe that the world doesn’t revolve around her desires. No, instead Nelle will use Wiley to obtain even more of whatever she happens to want at any given period of her life.

For Nelle, manipulation is all. (And, despite Carly’s life-change narrative, is anyone buying the idea that she’s not still as manipulative as she ever was?)

Over in an alternative universe, Nelle isn’t as bad as she seems. There, GH fans are convinced that Nelle absolutely is the next Carly. She’s on a path to redemption that will see her either gain full custody of Wiley, or shared custody with Wiley. Under no circumstances will Nelle lose custody of Wiley completely. That will be a good thing for a Nelle who only really wants to be understood. Indeed, Nelle wants the same things that any normal person wants! She wants what Carly wants.

For example, Nelle has actually been quite blatant about what it is that she desires. Nelle wants Carly Corinthos’s life. Nelle wants to be married to the rich, sleazy mobster. Nelle wants the big house, the big Mercedes-Benz, the Olympic sized pool in the back yard, and luxurious vacations all over the world.

And, Nelle wants Wiley to be like Michael Corinthos (Chad Duell) … easily wound around her finger, with no spine, no views of his own, no nothing because well … mommy knows best.

If Nelle Benson should gain even shared custody of Wiley, GH fans should get ready for Nelle to put on a show for the ages. Viewers can expect that Nelle will pretend to be the female version of the ubermensch. Soccer mom Nelle? Move over Carly Corinthos!

The bottom line is that while it is possible Nelle could transform into an angel of light when and if she gains custody of Wiley (even shared custody), it’s highly unlikely. Nelle might appear to try for a time, but in the end, when Wiley heads out onto the field, GH fans know that the moms on the opposing team had just better check their kids’ Kool-Aid for cyanide.