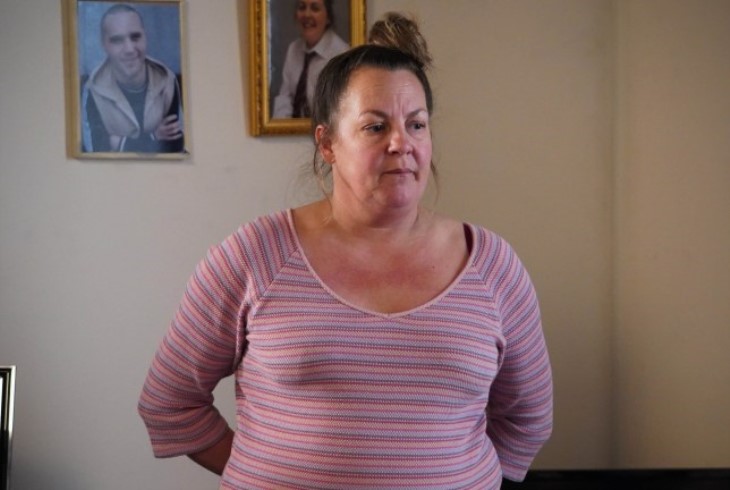 EastEnders Spoilers hint that Karen may be on her way out of Walford in upcoming episodes. Viewers have been watching as Karen Taylor (Lorraine Stanley) has been preparing to leave Walford because of a threat she received from Ian Beale (Adam Woodyatt).

Karen has to leave Walford, or Kayden will be put into care. However, viewers have been hopeful that Karen will be able to stay in Walford, especially after recent episodes where Sharon (Letitia Dean) wondered if she was making the right decision by giving up her son. However, will she actually leave Walford behind with Kayden?

Karen is facing the idea of leaving EastEnders as she makes the decision to either leave her children behind in order to keep baby Kayden from being put into care. She was given Kayden a few months ago as she was unable to look after the little one because of her grieving over her son, Dennis (Bleu Landau), who had recently passed away.

This was shocking for Karen as she thought that the decision was a big one to make but wondered if the mother was just too overwhelmed and may just change her mind. She agreed to take her grandson but was ready to hand him back when Ian came around. However, to her surprise, Ian was not there to take the young boy back but instead to tell her that she needed to leave Walford with Kayden, or he would be put into care.

This put her into a weird position as she had a whole life in Walford, including her children. The actress Lorraine Stanley gave insight on Sharon’s decision, “I don’t think Karen can quite get her head around it because Karen is such a maternal mum, I just don’t think she’d even do that as a mother. In a way, she’s doing a similar thing but her kids are grown up so it’s different. So I think she’s got mixed feelings really. She understands what Sharon’s going through but I don’t think it would be something she’d ever do herself.”

She goes on to discuss how Karen is feeling about having to leave her Walford, “Obviously as a mother she doesn’t want to leave her children but she feels that she’s doing the right thing for Kayden, she couldn’t bear him to go into care so it’s her only option. I think she’s really bonded with him, being that age as well, she has really strong feelings for her little grandson.”