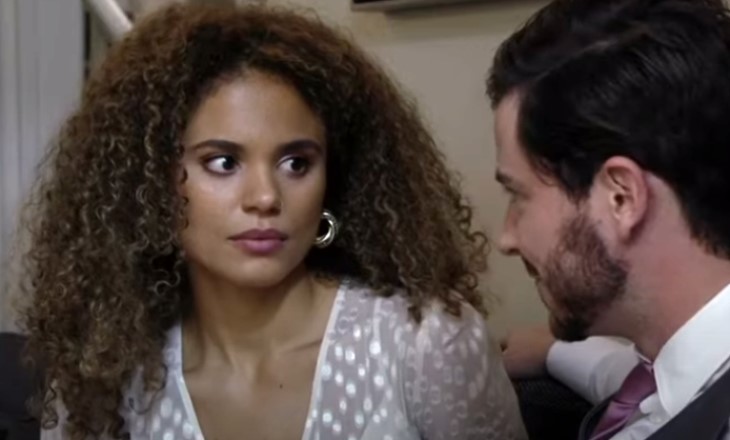 Eastenders spoilers and updates reveal that Gray Atkins (Toby-Alexander Smith) is abusing his wife and has been for quite some time. Fans want to know when he’s going to be exposed or what the couple’s future will be. Recently, the actor opened up about the domestic abuse storyline and teased the future for Gray and Chantelle Atkins (Jessica Plummer).

For a long time now, we have watched Gray abuse Chantelle. Not too long ago, he beat her so badly that she couldn’t stand up without using the counter for support. It was all because he thought that she told Mitch Baker (Roger Griffiths) that he no longer had a job at the law firm. However, she wasn’t the reason how Mitch found out.

Will EastEnders Return With Entirely New Plots Or Simply Be Altered To Accommodate Hiatus?

Eastenders spoilers reveal that Gray has two sides to him. There is the persona that the public sees. He appears rational, calm and collected. People also have a good perception of him and think he’s such a great guy for helping Whitney Dean (Shona McGartey).

However, he is much different behind closed doors. Chantelle lives in fear because she doesn’t know when or what is going to set him off next.

Speaking to Digital Spy, Smith talked about the domestic abuse storyline. He indicated that fans won’t see a quick resolution. So, this story could go on for a while.

“It’s meant to be difficult to watch. Domestic abuse can go on for years and years – and it’s painstaking, difficult, and arduous.”

The actor also talked about how the storyline isn’t just about Gray beating Chantelle. It’s about all those other elements that make up the part of their lives. He explained,

“We also see how what happens in the outside world can affect what’s going on behind closed doors for them. It takes time to show all of those elements. I do think it’s important that we are taking our time with it… We certainly didn’t know that they’d bring us into the show as this picture-perfect, Instagram family, then have the shock reveal last summer of what was really going on.”

As for the long-term future, Smith said they really don’t know what’s going to happen with Gray and Chantelle months from now. They just take it script-by-script.

What do you think of what Toby-Alexander Smith said about Gray and Chantelle Akins? What do you predict is going to happen next with this soap couple?