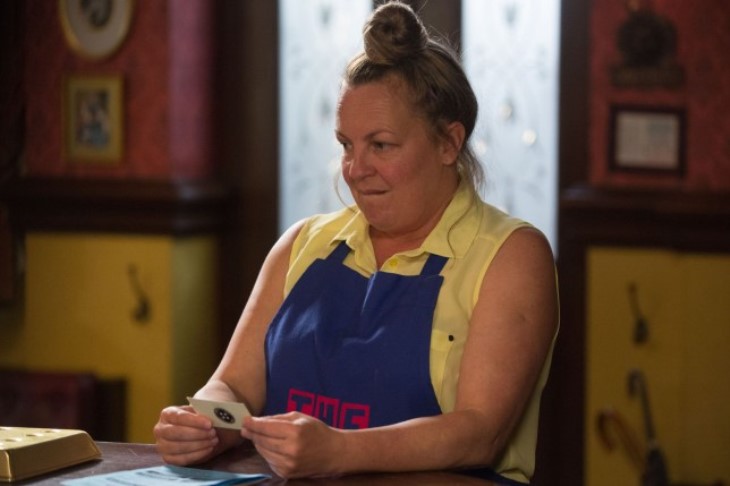 BBC EastEnders spoilers hint that Karen Taylor (Lorraine Stanley) is going to be deep in a love triangle in upcoming episodes. Karen is currently in a relationship with Billy; however, she was told by Mitch Baker (Rodger Griffiths) that he still has feelings for her.

After Sharon decided to take her son back home, Karen was able to stay in Walford. Although she will not be leaving Walford, the drama in her life will not be ending any time soon as Billy and Mitch are both after Karen’s attention. Will she be forced to pick one of the two, and if so, who will she decide to be with?

EastEnders Spoilers: Jessie Wallace Teases Her Return To The Soap – Kat May Be Coming Back

Karen has been going through a lot recently. First, she was shocked to have Sharon Mitchell (Letitia Dean) leave her child, Kayden, with her. Then Ian Albert Beale (Adam Woodyatt) came to her home offering money to take care of Kayden and then threatening to put Kayden in care if she does not leave Walford. This made her come up with plans to leave Walford with Kayden, but she continued to try and get Sharon to accept her son since she is the mother of Kayden.

She would eventually go over to Sharon one last time the day that she was supposed to leave. This was when Sharon changed her mind and decided to get her son back. This would leave Karen to take her life back in Walford to the pleasure of her family. However, the drama continues to follow Karen as Mitch decides to reclaim his relationship with her.

When Billy learns of Mitch’s interest in Karen, he is concerned about it and begins to notice that he does not fit into the family as much as Mitch does. Later on, he faces up against Mitch, who is not giving up on Karen; however, he decides to fight back as well. Although he acts confident, he is concerned about his relationship with Karen and if it will last.

While on a date, things turn from bad to worse as Mitch shows up, and tensions begin to rise. This leads to the two of them fighting and Mitch hurting Billy. Karen is shocked when Billy gives her an ultimatum. Who will she pick? Watch EastEnders from Monday and Friday at 8 pm and Tuesday and Thursday at 7.30 pm on BBC One to find out what happens next.

hare your thoughts in the Comments section below and join the HH community, for all the Soap News Keep Visiting Hollywood Hiccups, For all the Royal News & Brit Soaps, check out Celebrating The Soaps