Days Of Our Lives Spoilers: ‘Justin Was At His Breaking Point,’ Wally Kurth Talks Facing Orpheus 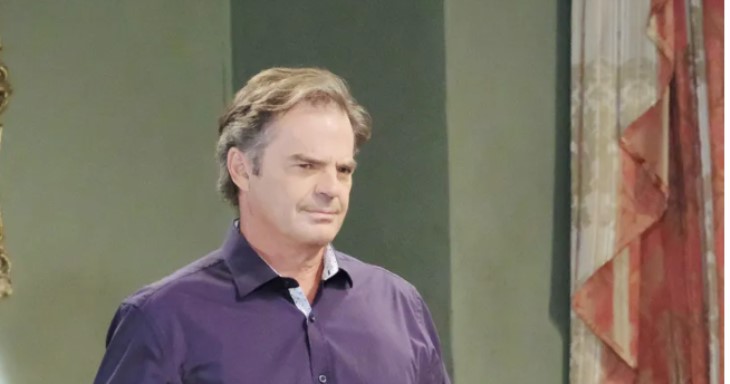 NBC Days of Our Lives spoilers and updates teased that we would see Justin Kiriakis (Wally Kurth) point a gun at Orpheus (George DelHoyo). That scene played out on Tuesday’s episode. The actor spoke about the storyline and explained that Justin is at his breaking point. Will he continue to lose control as his mental anguish continues? Is this the peak or is there more to come?

Days Of Our Lives Updates – Car Crash Truth Changes Everything

DOOL spoilers reveal that it’s been a rollercoaster for Justin in regards to Adrienne Kiriakis’ (Judi Evans) death. First, Will Horton (Chandler Massey) confessed. After being in prison for a year, Maggie Horton Kiriakis (Suzanne Rogers) took responsibility. Now, we find out that Orpheus was the one responsible for the car crash that claimed two innocent lives.

On Tuesday’s episode, viewers watched as Justin claimed to need to see the district attorney about Orpheus. However, he stole the villain’s gun from evidence and snuck into the interrogation room. He pointed the gun at Orpheus and only let go when Steve “Patch” Johnson (Stephen Nichols) said he would kill him.

Of course, it was just Steve’s way of resolving the situation and getting the weapon away from Justin.

Days of Our Lives spoilers reveal that Justin is still reeling from the death of Adrienne. It’s not that he hasn’t mourned his wife. It’s that every time he thinks he knows the truth and finds peace with it, his world gets turned upside down again. In the latest issue of Soap Opera Digest, the actor confirmed that facing Orpheus with the gun was Justin’s breaking point.

As for what is going to happen next, Justin will visit Adrienne’s grave. He asks his dead wife for her blessing to marry Kayla Brady (Mary Beth Evans).

“After everything that’s happened Justin finally knows who killed Adrienne. Now he wants to start moving forward. He needs to get her [Adrienne’s] blessing, and he’s also hoping to find some sign that this is the right thing to do.”

What did you think of Justin’s bold move to face Orpheus? Were you surprised that he lost control like that? Was this the floodgates that Kayla was waiting for or could there be more drama ahead? We will have to keep watching the NBC soap opera to see what happens next.