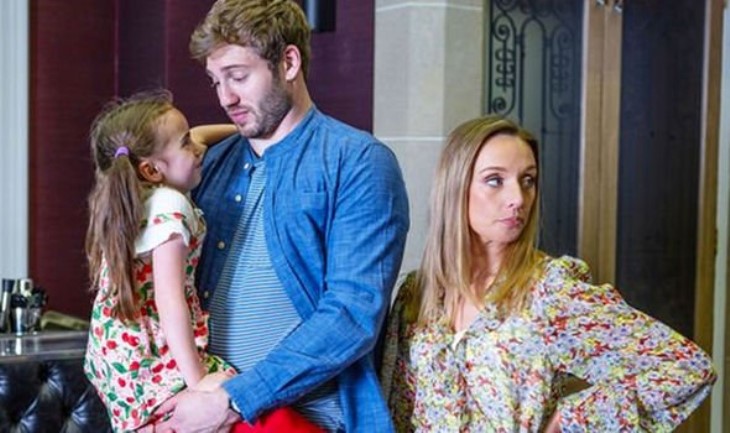 Emmerdale spoilers reveal that Andrea Tate (Anna Nightingale) is found at a hotel by Kim Tate (Claire King). Meanwhile, Leyla Harding (Roxy Shahidi) offers Andrea a deal if she goes home. After dealing with police, Andrea sees Jamie Tate (Alexander Lincoln) and Belle Dingle (Eden Taylor-Draper) together. She leaves “for good” without Millie, but is it just another scheme?

As police search for Andrea and Millie Tate (Willow Bell), Kim decides to follow Leyla. Her hunch is right and Leyla leads Kim straight to the hotel where Andrea is hiding out with her daughter. When Leyla talks to her friend, she tries to reason with the woman. She tells Andrea that it’s time to take Millie home. When she struggles to pay the hotel bill, Leyla uses this to strike a deal. She will take care of the lodging expenses, but only if Andrea goes back home.

Emmerdale spoilers reveal that Andrea takes Leyla’s offer and then explains going missing to the police. As she returns home, Andrea is devastated to see Jamie and Belle together. They are declaring their love for one another. That is when Andrea realizes that her marriage is really over and nothing she does will bring it back.

It is teased that after seeing Jamie and Belle together, Andrea decides to disappear again. However, she plans on leaving forever, but not with Millie this time. She seemingly abandons her daughter and vanishes once again. Even though the publication suggests that Anna Nightingale’s exit is inevitable, something seems a bit odd with this story.

Andrea fought fiercely for her daughter when she was going through the divorce with Jamie. Custody was a huge issue and Andrea was not giving up time with her child. So, for her to just abandon Millie after everything she has tried to keep her family together doesn’t make sense. There is a chance that Kim is somehow involved in Andrea’s decision to leave, but there is another possibility.

What if this is just another scheme masterminded by a heartbroken wife? What if she only wants Jamie (and Kim) to think she’s out of the picture while she works on a plan? If they think she’s gone and custody isn’t an issue, then they will let their guards down. Then, Andrea can swoop in like a predator and go in for the ultimate revenge.

Remember, Andrea has learned quite a bit from watching and dealing with her mother-in-law. She’s not giving up this easy and there is much more to this story that we don’t know yet.