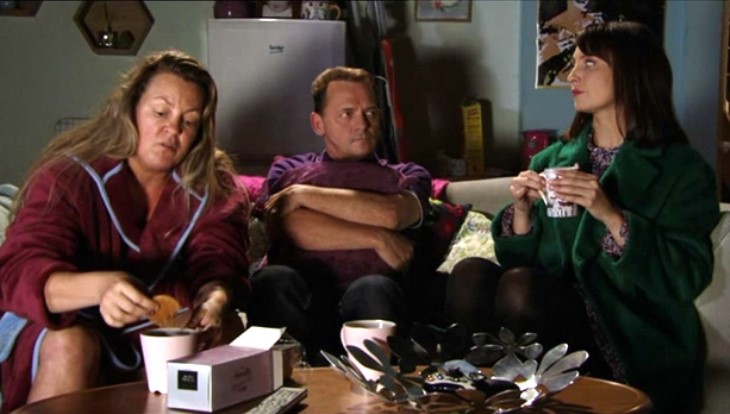 Nonetheless, his ex will return to town in the near future, and she has a bombshell to drop that could change everything.

Will Billy’s Ex-Change His Life Without Even Trying?

Billy and Karen have sparked a growing relationship albeit with her ex lurking in the background. Now that another ex, Billy’s ex Honey (Emma Barton) will return, will she be the deciding factor in the culmination of the aforementioned love triangle? Honey and Billy have two kids which could factor into a decision to reunite.

Loyal fans will remember that Emma Barton left the sudser to participate in Strictly Come Dancing, where she placed third.

Billy’s fling with Tina Carter (Luisa Bradshaw-White) was the straw that broke the marriage of Billy and Honey with Honey moving on with Adam Bateman (Stephen Rahman-Hughes).

Following the revelation, Honey struggled with bulimia and left to get her affairs in order, leaving Billy with the kids.
Thus, the opening for Billy and Karen was created; except that Mitch is still in love with Karen.

EastEnders spoilers – Will Honey’s appearance change the love dynamic between Billy and Karen?

Although Karen has remained intent on Billy, he is jealous of Mitch. The final episodes revealed that Mitch and Billy took it to a physical level as they fought over Karen.

Will Billy forget all about Karen once Honey enters the scene? Then again will Honey be at all interested in wooing Billy? Their relationship has been over for some time after all, but they have been bonded through their parenting of their children.

And, Billy was instrumental in discovering Honey’s eating disorder and encouraging her to get help. In fact, he has said that he would help her through anything at all.

When she returns will simmering feelings bubble over, causing her and Billy to confront their feelings for each other? Is it possible that Honey will drop an emotional bomb on her ex? If so, what will be the effect on his relationship with Karen?