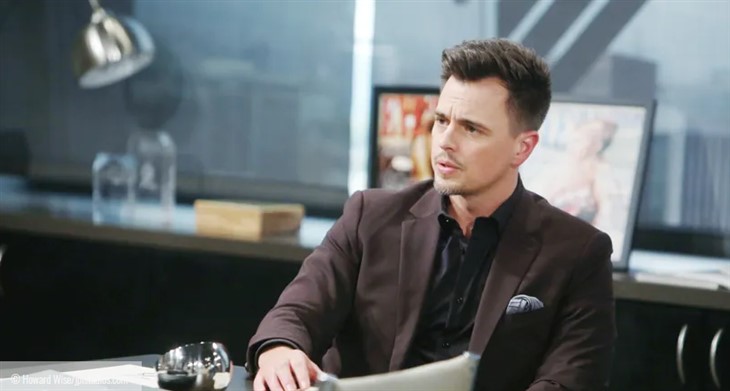 CBS The Bold and the Beautiful spoilers tease that Wyatt Spencer (Darin Brooks) will move from surprise to panic when he doesn’t hear from Flo Fulton (Katrina Bowden). As B&B fans recall, Sally Spectra (Courtney Hope) and Penny Escobar (Monica Ruiz) were carrying Flo’s body out of Wyatt’s living room just as he was entering and then this soap’s final new episode ended.

How Does B&B Production Pause Impact When The Next New Episodes Will Be Seen?

Carrying that scene into the next fresh one, Sally and Penny will need to take Flo to another location. She’ll need medical attention, which Doctor’ Escobar should be able to provide, assuming that Flo can be contained.

Sally and Penny must be able to follow through on their plan to prevent Flo from telling Wyatt that Hope’s character admitted to lying about having a terminal condition and that Ruiz’ alter ego went along with it in order to gain access to a career at Forrester Creations. In that instance, Flo will go missing and Wyatt will panic.

The Bold And The Beautiful Spoilers – What Does Mess Mean?

Wyatt will naturally be suspicious in finding his living room a mess. The scene will appear to represent the aftermath of a struggle, as nothing was taken. So, a robbery will be ruled out after a brief amount of time has passed.

He’s likely to search the rest of his home, finding that no other room is disrupted. But he’ll also be unable to make contact with Flo and possibly Sally during this time.

Sally was asked to move out of the beach house but hadn’t done so yet. That means Wyatt is likely to first be concerned for her safety, as her walker was left behind when the scene was ending. An early cover would be for Sally to explain away the mess, rather than claiming to be surprised by it.

Wyatt’s next level of concern will be for Flo, who won’t be able to respond to his texts or calls. Within hours Wyatt will begin to think that she’s in danger.

Sally’s calculation will prove crucial at that point in the plot. Her claim to have caused the mess would be problematic, as the walker would have been left behind. However, she and Penny could combine to say that Hope’s character needed immediate care. That type of lie might work temporarily.

If Sally pretends to have no knowledge of what happened, then she’ll need to explain why she left her walker behind. Viewers know, based on the scene’s timing, that Sally didn’t have time to carry Flo out with Penny and return to retrieve her prop.

Along with whatever form of contact Wyatt has with Sally, he’ll make contact with Flo’s mother, Shauna Fulton (Denise Richards). Of course, she won’t be able to provide any useful information but will join the search.

Wyatt will inform his family members and others in hopes that someone is with Flo, or at least has useful knowledge. And so the growing search will continue.

Sally’s ability to handle the pressure that dramatically ramps up will determine how, or if, she’s able to push her increasingly destructive ruse. All the while Flo will either remain unconscious or will awaken to a different reality.