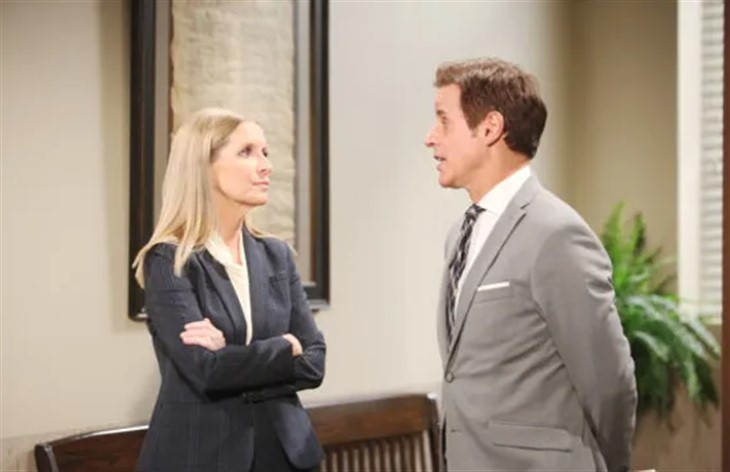 CBS The Young and the Restless spoilers and updates reveal that you shouldn’t be surprised if Michael Baldwin (Christian LeBlanc) is thrust to the front of the canvas when the show starts back up. He’s a fan fave with plenty of unexplored potential and fans have been vocal about his wasted talent.

The show hasn’t started production yet, and while fans are watching repeats, they’re seeing plenty of the once shady lawyer and making noises about why he doesn’t have a story.

Which is a good question because he has all sorts of drama waiting to be set off, especially in his family life.

Apparently show execs do listen to fans and check social media to see what they’re griping about as well as what they’re loving, according to our source at CBS.

Which is why showrunners may be thinking that it’s time for a Michael Baldwin story.

The Young And The Restless spoilers – Would Michael Baldwin Cheat On Lauren Fenmore?

Michael Baldwin wasn’t always such a good guy, devoted husband, and earnest family man. In the beginning, he was at least 50 shades of gray. Even now, he isn’t above stooping low if it means protecting his family, which he has had to do most recently with his brother Kevin Fisher (Greg Rikaart).

In his new job will he bend or even break the law to suit his needs? Maybe it’s more likely that he’ll act on those other needs! Fans hardly see Lauren Fenmore (Tracey E. Bregman) and Michael anymore and maybe there’s a reason for that. Michael having an affair would definitely constitute a front-burner storyline!

Y&R Spoilers – Will Fen Baldwin Do Something Crazy Again?

Michael doesn’t have to look far for trouble, it’s his son Fen Baldwin’s (Max Ehrich) middle name. It’s possible that Michael is pushed to the forefront if Fen reenters the canvas with another drug scandal that needs to be handled.

The Young And The Restless Spoilers – Is Lauren’s Life In Danger?

We could also see Michael’s reemergence being tied to something happening to Lauren. He loves her dearly and if she were in danger he would move heaven and earth to help or save her.

It’s plausible that Lauren is written off due to any number of reasons—illness, death, divorce, amnesia, etc. If this happens Michael would have to be shown dealing with the aftermath and then possibly moving forward with a dynamic new storyline (or lady?)