Days Of Our Lives Spoilers: Chad Won’t Turn In Kristen, But Wants One Thing In Return 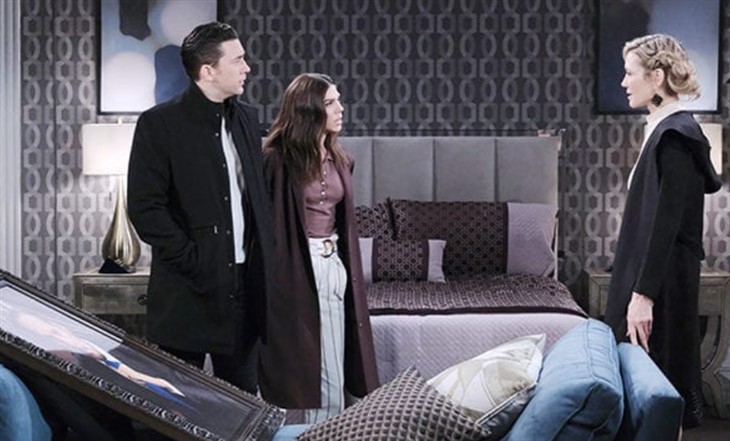 NBC Days of Our Lives spoilers and updates reveal Brady Black (Eric Martsolf) is starting to feel the pain of losing his family. Suddenly, he feels Kristen DiMera’s (Stacy Haiduk) presence. The two are reunited, but Chad DiMera (Billy Flynn) spots the fugitive. He promises not to turn her in, but only if he gets something in exchange. What does he ask for, and why is it so important?

DOOL spoilers teased that Kristen would return to visit Lani Price (Sal Stowers) on her wedding day. She is still a fugitive, so she sneaks around Salem so she can see her best friend without someone seeing her. However, there will be two people who learn Kristen’s back in town.

Days Of Our Lives Spoilers: Abigail’s Vengeful Return – Who Triggers Her Fury?

In the latest issue of Soap Opera Digest, Martsolf said that Brady talks to Dr. Marlena Evans (Deidre Hall) about what he is going through. The tormented character decides that he isn’t on the best path. Then, when he is walking through the town, he senses a presence. He knows that it is Kristen.

After a few moments, Brady sees Kristen and calls out her name. She hesitates because she knows it is too risky. But she can’t help herself and “Bristen” is reunited.

Days of Our Lives spoilers reveal that Chad comes by and spots his sister. The two barely have a relationship, and it is complicated at best. So, Brady and Kristen worry that Chad is going to turn her in. However, he agrees not to notify the police. But he wants something in exchange for his silence.

Chad and Gabi Hernandez DiMera (Camila Banus) are battling each other once again. He wants something he can use against the widow. He tells Kristen that he will keep her secret, but wants the DiMera stock shares. Once he has them in his hand, Chad can fend off Gabi’s challenge. Of course, Kristen agrees to give Chad what he wants.

Days Of Our Lives Spoilers and Rumors: Chad Drugged Abby To Get Rid Of Gabi https://t.co/Ig87ImGvO0 pic.twitter.com/nDQuFgMd6E

What do you think of Brady and Kristen reuniting? What do the future hold for the couple and their baby? How will the stock shares affect the outcome of the Chad and Gabi war? Will there be any end to the two battling each other or could things just get more heated? Keep watching the NBC soap to see what happens next.