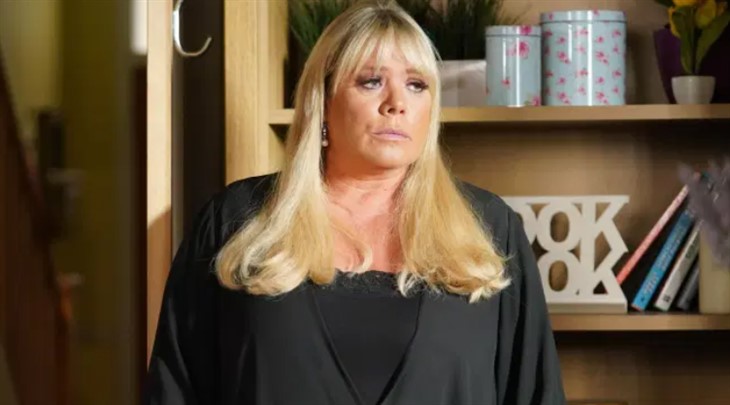 BBC EastEnders spoilers and updates hint that there is more to come for Sharon’s decision to buy Queen Vic from Mick Carter (Danny Dyer) and Linda (Kellie Bright) before her estranged husband could. Mick and Linda have been trying to sell off the Queen Vicso that they can move out. After Phil (Steve McFadden) became her sponsor and Linda saw that he wanted to buy the Vic because of Sharon, she decided to sell Queen Vic to him.

However, when Sharon decided to take her son back to raise, things became tense between the two and Linda expressed her disdain for Phil’s behavior causing her to not want to sell to him, this concerned both Mick and Sharon who wanted to get Linda away from Queen Vic. The last new episode ended with Sharon being revealed as the one who brought Queen Vic.

As viewers know, EastEnders aired its last new episode until they are able to release the new ones, with a shocking turn of events. Sharon who had been told about Linda refusing to sell Queen Vic to Phil by Mick had decided to buy it instead. However, viewers know that this will not be the end and that this will lead to some more drama between Phil and Sharon when the show comes back on. However, it has lead viewers to wonder just what might come from the major twist and what will be next for Sharon.

EastEnders star Letitia Dean will soon tease the outcome to the Sharon cliffhanger. As viewers know, the behind the scenes special EastEnders: Secrets From The Square has been giving viewers a way to connect with the actor and actress while also producing new content. Letitia Dean will be joined by Adam Woodyatt, who plays Ian Beale.

They will discuss a few things, such as memories and their start on the show. During the episode, they will also touch on Ian’s iconic “I’ve got nothing left” outburst, which went on to make Adam into a popular meme. Stacey Dooley will also be talking to them about which actor is most similar to the character they play as well as taking a look at Ian’s café.