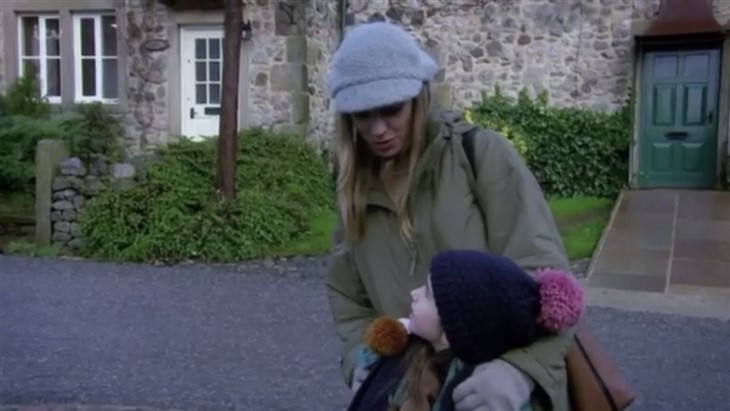 ITV Emmerdale spoilers and updates reveal that Andrea Tate (Anna Nightingale) and her daughter are found by the police. The missing woman has to answer some questions but assures the officers that they are just fine. Jamie Tate (Alexander Lincoln) is told that the missing duo has been located. However, police won’t tell him anything else, including their location.

When Jamie and Belle Dingle’s (Eden Taylor-Draper) affair was publicly exposed, Jamie had no idea at the time that it was all Andrea’s doing. When he did learn about his wife’s manipulative scheme, he was furious. Despite Andrea’s intention to keep her family intact, it actually had the opposite effect.

So, she decided to take their daughter, Millie Tate (Willow Bell), and “go missing.” The actress recently confirmed that Andrea running off was intended to make Jamie suffer and teach him a lesson.

Emmerdale spoilers reveal that Leyla Harding (Roxy Shahidi) knows exactly where Andrea and Millie are hiding. But she isn’t the only one. When Leyla skips off to see Andrea at the hotel, she is followed by Kim Tate (Claire King).

Leyla does try to encourage Andrea to take Millie home. However, the police get to Andrea first, the Mirror reports. Either their investigation leads them to the hotel, Kim calls in a tip, or perhaps Andrea calls the police herself to call off the search.

When police question Andrea at the hotel, she has some explaining to do. She will likely tell them that she was devastated over the affair and ran off without thinking. She just needed time to figure out her next step. Police will probably accept this excuse and tell her she needs to return home. After all, there is a young child involved and custody will have to be worked out.

Police do inform Jamie that his wife and daughter have been found safe. Of course, he is relieved and decides to celebrate. What does he do? Declares his undying love to Belle, but what he doesn’t realize is that Andrea spots the lovers upon returning home.

This is when she makes a sudden decision that could affect Millie forever. She decides to leave “for good.” Does this mean that Andrea really abandons her daughter? Or is that just what she wants people to think while she builds a strong case? We will have to keep watching the soap to see what happens next.