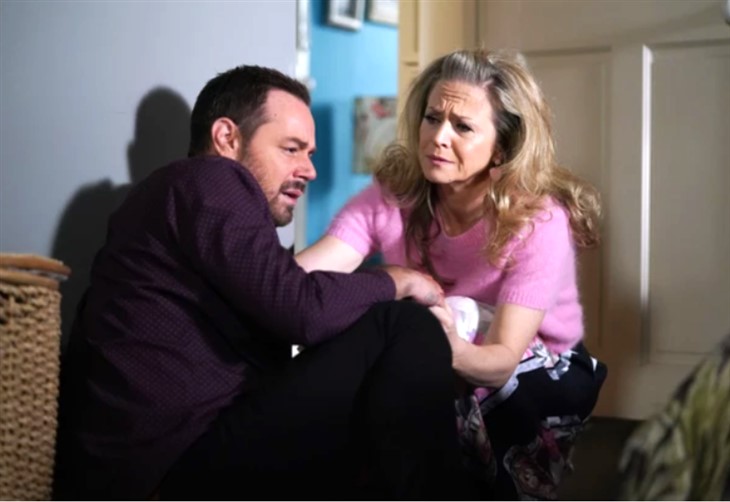 BBC Eastenders spoilers and updates reveal that selling The Vic doesn’t mean the end of the Carters’ story. It just ends one chapter and begins a new one. There is speculation that the couple could struggle with a tragic death. Who could die when the soap returns and how will this affect Mick Carter (Danny Dyer) and Linda Carter (Kellie Bright)?

Soap Couple Will Be Tested

As previously reported, Dyer and Bright appeared on the Eastenders special, Secrets From The Square. The actors discussed their characters, best storylines, and hinted at what comes up in the future. Bright couldn’t give any solid details but did say Mick and Linda will definitely be tested in future episodes. Ever since she made that statement, fans have been wondering what that means for the couple.

In addition, Dyer gushed about his next storyline. The actor is really excited about it and said it’s probably the best story in the history of him being on the BBC soap. Now, those that have watched Eastenders for a long time know Mick’s history. He has been giving some pretty major storylines in the past. So, what could be coming up that has Dyer so excited?

During the Secrets From The Square segment, the actors talked about a past storyline that involved Johnny Carter (then portrayed by Sam Strike). The young man came out after Mick and Linda came to Walford.

This is interesting because the Carters have four children, but only one was mentioned during the televised special. Could that have been a big clue? And if so, what does that mean for Mick and Linda’s future?

Express speculates that Johnny was mentioned for a reason. The publication also suggested that Mick and Linda could be tested by the young man’s death. The last time we saw Johnny he was headed toward Manchester for a job opportunity at a law firm. That was two years ago and we haven’t seen him since. Could the Carter be tested by Johnny’s death?

If so, then it might also be a reason to bring back Nancy Carter (Maddy Hill). She has been living with Tamwar Masood (Himesh Patel) in Australia. The actress recently left Casualty and there is a word that her character could be returning to Eastenders.

Eastenders Spoilers: Is A Shocking Comeback For Janine Butcher In The works? https://t.co/FhYvDUano0 pic.twitter.com/I2yWexr5SX

This theory is a possibility considering Mick has been given all kinds of different storylines, but not one centering on a child’s death. It would be tragic and could definitely test the couple, especially since Mick and Johnny were so close.