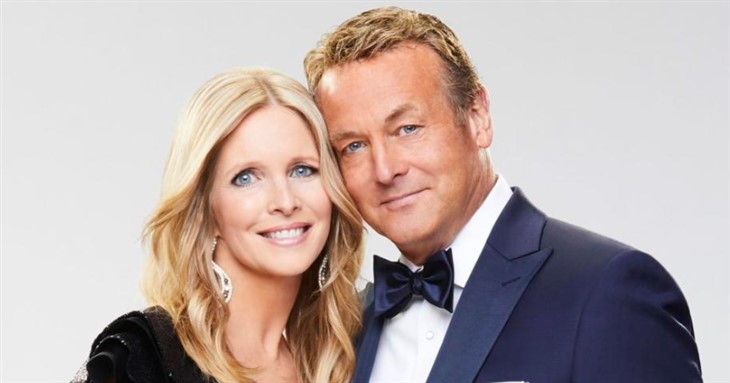 CBS The Young and the Restless spoilers and updates document that Lauralee Bell (Christine Blair Williams) and Doug Davidson (Paul Williams) participated in an Instagram Live chat while a classic episode of Y&R was playing live in California. They used the watch along format to comment on the late December 1994 episode where Phyllis Summers (Michelle Stafford) purposely hits Paul and Christine with her car just prior to their wedding ceremony.

Davidson and Bell discussed numerous details of that particular episode, which was filmed on location in Pittsburgh. The actors recalled that they had a late call because the main street needed to be shutdown. Stunt doubles were used during the impact scene that was said to have taken place outside of Newman Towers.

The longtime cast members responded to numerous complimentary comments that were offered by many fans. They also offered answers to questions that were asked.

Bell commented about her character having a jukebox in her apartment during the wedding shower episode that was broadcast earlier in the week. She contrasted that to Chris and Danny Romalotti’s (Michael Damian) apartment that had an elevator in it. She humorously recalled that she and her colleagues had to physically move up or down to mimic the fake elevator’s motion.

The actor, whose parents (Bill Bell and Lee Phillip Bell) co-founded the show, also mentioned not remembering the dialogue where Paul’s mother, Mary Williams (the late Carolyn Conwell), presented Chris with a four-slice toaster at the wedding shower.

Davidson referenced his recent appearance on Rick Springfield and Vance DeGeneres’ YouTube series Ultimate Mini-Series: The 60-second Guide to Songwriting with a Partner.

Bell discussed her recent Instagram Live chat with Damian, where both actors watched a rebroadcast of the episode where Christine and Danny were married. She also said that she is in touch with Birn through email a few times a year.

The Young And The Restless Spoilers – Pristine’s Present And Future

As viewers know, Davidson and Bell currently work on recurring status. So their characters aren’t seen as often as they had been in the past when both worked on regular contracts.

The Young and The Restless News Updates: 6 Things To Know About Y&R Paul Williams #yr #youngandrestlesshttps://t.co/B8EIi8eIed

Bell said the plan is for Y&R to resume filming in a few weeks. Pristine fans are surely hoping to see more of this married couple that they’ve loved for years when new episodes are available.